Winner of the LG Challenge 2019 revealed

Rob Comber won over voting delegates and judges with his project that will tackle the educational impact of child poverty through summer schools. 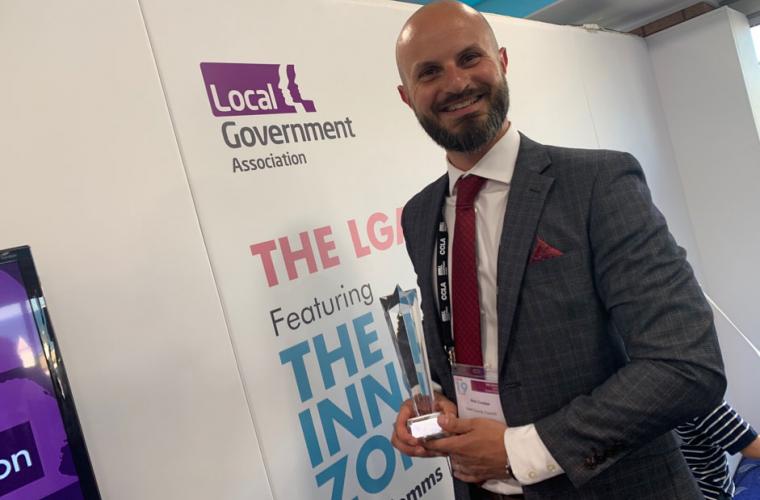 Rob Comber, from Kent County Council, has been crowned the winner of the 10th LGA Local Government Challenge.

He fought off competition from nine other leading candidates in local government when he was declared the winner at the LGA Annual Conference in Bournemouth on Wednesday 3 July.

For his project, Summer Slide, Rob Comber received the £10,000 award from Lady Bruce-Lockhart, the wife of the late Lord Bruce-Lockhart, former Chairman of the LGA and Leader of Kent County Council.

He won over voting delegates and judges with his project that will tackle the educational impact of child poverty through summer schools.

His proposal aims to engage with eight identified schools in Kent – four primary and four secondary – to deliver a summer education (academic) enrichment programme, targeted at no cost to children and communities living in poverty.

It will engage children who would have previously been affected by Summer Learning Loss, the concept that some pupils do not retain learning between academic years over the summer holidays, and will enhance young people’s social and emotional development.

Mr Comber said: “It has been an honour to work with nine incredible people over the five Local Government challenges. Looking at what these individuals have achieved in the last six months, the future of local government is in the hands of some seriously talented individuals.”

Delighted to win, he added: “I’m excited to go back to Kent and start my project to see if we can make some real tangible difference to young people’s lives. It will look at the impact that poverty has over the summer holidays and the effect that has on their education.”

This year’s annual Local Government Challenge, now in its tenth year, saw competitors take part in five real-life challenges in host authorities around the country that tested their individual and team working skills.

“In its 10th year, our Local Government Challenge demonstrates that we have a wealth of talent working in local government who are incredibly passionate in what they do.

“Each year, 10 exceptional officers are offered a unique opportunity to develop their careers by tackling real life challenges faced by host authorities, and previous candidates have said how the Local Government Challenge has helped them to deal with challenges facing their own councils.”