Cornwall Council and the University of Exeter: Climate Change and Health Adaptation Tool

The Climate Change and Health Tool is an evidence-based resource to support public sector institutions, initially in Cornwall, but with the hope that it can be rolled out nationwide. The model will provide evidence for decision-makers to focus beyond short-term outcomes and understand the potential implications of climate change mitigation and adaptation on health and the subsequent impacts across a broad range of sectors and services.

What was your challenge?

Climate adaptation will have significant impact on health outcomes, but the ability of local authorities to understand and act on the risks is limited. Decision making within local authorities can be focused on short term outcomes and siloed within services, potentially leading to oversimplified approaches, with a strong emphasis on mitigation rather than adaptation, which remains a largely unexplored and misunderstood yet vital policy driver as the scale of climate change effects become more apparent.

These approaches can also lead to maladaptation and significant unintended consequences. Health outcomes provide a ‘common language’ that enable complex problems, requiring whole system or multiple service intervention to be explored and addressed. This approach also recognises the complexity of the issues involved.

What was your solution?

Design a tool which can combine the latest modelling data on local climatic changes with a systemic analysis of the potential associated health risks and make recommendations to inform policy and decision-making. Involvement of local authority staff, and other regional stakeholders, in the development of the prototype, so that the tool is relevant to the existing governance processes and the needs of decision-makers.

What are your top three lessons learned?

What have the outcomes of the project been so far?

These meetings generated valuable feedback into the design and delivery of the prototype tool, as well as the perception of the links between climate adaptation and health. At three of the four meetings, attendees were asked for responses to questions on their organisation’s prioritisation of adaptation, the value of a decision-making tool, and the likelihood of their organisation using the tool once complete. The results, shown below, demonstrate a positive increase in all responses over the course of the project. 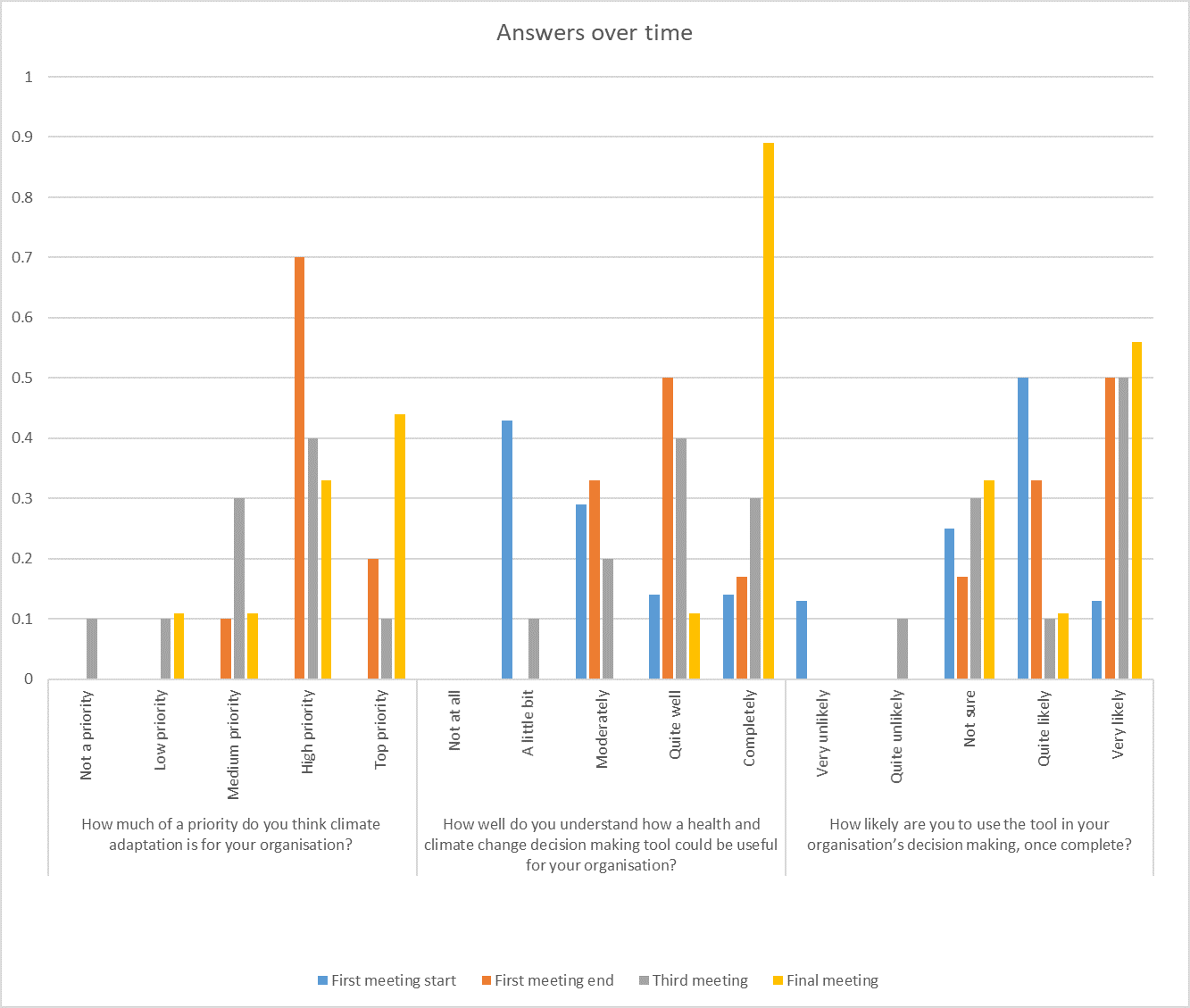 2. A more comprehensive Stakeholder Engagement report, based on 1-to-1 interviews, group interviews, a specialist deep-dive with those using climate data, and the monthly stakeholder meetings. A thematic analysis of the interviews identified the following major themes:

A proof of concept tool to demonstrate its functionality and outputs, which we hope to showcase at COP26. The tool includes:

How will these outcomes be sustained?

The stakeholder group will continue to be engaged, albeit with reduced capacity to organise workshops or meetings. The engagement aspect of the project will be supported by SWeCAN, the University of Exeter’s South West Environment and Climate Action Network, in order to respond to new opportunities to share the model more widely.

The development of the tool into a useable demonstration model is ongoing, with additional funding secured.

The ongoing model development will also benefit from a new partnership within the University to gain access to more detailed climate modelling data on a national level.

What is the anticipated longer term impact on progress towards net zero?

In the longer term, the anticipated impacts are that the tool is incorporated into the decision making of Cornwall Council, as well as other stakeholders regionally and we will see the tool rolled out nationally. This will dramatically improve the decision making of those organisations in responding to risks presented by the impact of climate adaptation on health.  The benefits go beyond carbon savings, but also contribute to creating positive feedback loops which reduce the likelihood of negative health impacts driving carbon-heavy behaviours. The climate effects evidence base for the tool will also help drive a wide range of policies not necessarily directly related to health outcomes.

How has this project evolved your approach to net zero?

The project has demonstrated the benefit of long-term partnership working and incorporating stakeholders into the initial exploratory stages of a project. Significantly, it is developing a mechanism to understand the complex impacts of climate adaptation on health and supported a systemic perspective on current and future challenges on a local, regional, national and international scale. It has also shown the value of HE/Local Authority collaboration, making data available to the University, more readily available to LAs – in this case climate models.

Who will benefit from your project?

The primary beneficiaries include decision makers and officers within Cornwall Council, as well as those in other stakeholder organisations. The tool offers a robust, iterative and evidence-based way to understand and act on adaptation, and interpret complex systemic challenges into relevant risk currencies, so that effective decisions can be made. By instilling a health inequalities approach into the tool, it is hoped it will, in the longer term contribute to address underlying inequality across our communities.

Describe how your partnership developed over the course of the project?

The partnership changed dramatically during the project, with the main Cornwall Council contact moving over to the University. Due to the wider engagement of Cornwall Council officers in the project, however, a new main contact stepped in and brought a stronger connection to the Council’s ongoing governance development.

Work was split into teams, with the Council roles taking responsibility for stakeholder engagement, while the University took on wider project management as well as the climate modelling and the health outcomes research. This enabled the project to start quickly and efficiently, making the most of the limited time period.

How will the partnership be sustained in the medium and longer term?

The relationship between Cornwall Council and the University of Exeter will continue through existing projects and partnerships, as well as the ongoing development of this tool. Both parties are committed to the long-term nature of this project, and others like it, and our partnership is also becoming more formalised with the finalising of a Civic Universities Agreement recognising the role of both anchor institutions in Cornish society.

Cornwall Council officers will continue to feed into the project development, to ensure that the tool is relevant and valuable to the evolving decision-making processes within the local authority.