In Slough we knew there were instances of modern slavery occurring, but there were very few reports of it happening. The campaign was launched on Anti-Slavery Day and ran for 6 weeks.

We knew we had to go beyond a typical local government PR campaign to get people to sit up and take notice. Our motives were two-fold: to encourage potential victims to recognise themselves as such and to generate an understanding among the general population that modern slavery exists and it is a crime.

Out of home advertising was used to take the campaign to another level. Images were used to depict the different types of modern slavery and the Modern Slavery Helpline was used in red to encourage people to call in.

We were keen to ensure that all of the borough’s communities could engage in the campaign, so posters were also translated into Polish and Romanian and placed at strategic points in the borough. These were interspersed with posters in English.

Where did we target? 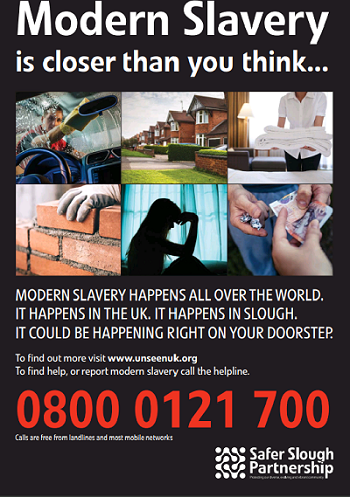 In May 2019 we advertised on petrol pump nozzles in seven petrol stations in Slough. This time the campaign ran in 5 languages (English, Romanian, Polish, Urdu and Punjabi) We await data from the Modern Slavery Helpline to measure the impact of that campaign.

In the future, we will be focusing on the different types of modern slavery and going into more detail in our marketing on how people are exploited under each of these.

We will continue to receive statistics from the Modern Slavery Helpline to measure the effectiveness of the campaign.

Please attach any imagery associated with your case study and send your completed template to webmaster@local.gov.uk.