In 2004, Barnsley Metropolitan Council made a commitment to consider biomass heating systems for all new and refurbished buildings. 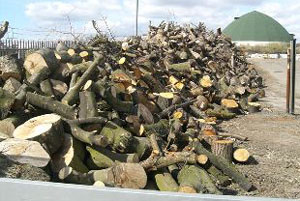 Smithies Lane Depot is Barnsley's main operational depot, running services such as waste collection, highways and parks. About 400 staff are based at the depot. The biomass boiler runs the heating for the offices and the canteen.

In 2006, the boilers at the Smithies Lane Depot needed renewing and, because of council policy, were replaced with biomass boilers. A 700-tonne store was also constructed to allow storage and air-drying of the wood-chips.

The council uses its own tree waste from parks and gardens. This is piled up at Smithies Lane Depot until there is enough for a forestry worker to come and chip it.

The Bio Energy Capital Grants Scheme contributed 25 per cent to the £100,000 cost of the boiler plant.

A £30,000 Forestry Commission grant covered half the costs of the drying shed.

The council had already approved its Biomass Implementation Policy in June 2004. Barnsley was once a coal mining centre, with coal-fired boilers heating local offices, flats and other buildings. As these come to the end of their lives, they are being replaced by biomass boilers.

Other options would be gas or oil, which are a lot more expensive than wood fuel.

The local community love biomass. Before the first scheme was ever implemented Barnsley held tenant meetings and expected some opposition. But all the tenants were all in favour. They saw it as getting rid of dirty, filthy coal and getting something better. They were even happier when it proved cheaper for them.

Barnsley's engineers worked closely with the council's planners. There were no issues with environmental impact assessments or feasibility because the council were just replacing boilers in existing buildings.

Air quality is sometimes cited as a problem with biomass. Barnsley Council has worked closely with Sheffield University to prove that emissions from biomass boilers do not contravene European directives on emission matters.

Barnsley had its own in-house expertise. But if you need to approach consulting engineers, be careful. There are three questions Barnsley recommend asking of anyone who you might bring in to give you advice:

If they cannot answer those questions satisfactorily, do not use them.

There is now a robust supply chain of wood fuel in Yorkshire. Barnsley Council estimates that in two years time - when its Building Schools for the Future programme finishes - 180 jobs will have been created in its supply chain. Not all of these will be in Barnsley.

Smithies Lane Depot has a half megawatt boiler, so it generates half a megawatt of heat every hour. This has displaced about 200 tonnes of coal and saved nearly 500 tonnes of CO2 a year since 2006. The depot makes all its fuel from tree waste that would otherwise have gone to landfill.

"Biomass is certainly a lot cleaner than coal. The fuel that we use is free so the only cost we've got is chipping. It just seems to be a good way of providing heat - we use what would have been possibly a waste product to fire up the boiler. So it completes the circle if you like."

Carbon emissions from Barnsley's buildings portfolio were 70,000 tonnes in 1990. This was down to 33,000 tonnes for the financial year 2008/09 due to biomass boilers and changing the heating systems.

"As a politician I have witnessed at first hand the material benefits brought to householders, to council tax payers and tenants - lower costs, less noise and cleanliness.

"Alternative fuel has to be a ‘no brainer' with fossil fuels in decline, being harder and more costly to reach, not to mention bringing the attendant problems of waste, noise and pollution. But the important point is that this is not an abstract concept or laboratory experiment. Biomass is alive and happening now in our borough and it is mainstream. It is ordinary people, not just the enthusiasts, who embrace it."