Funding the move to anaerobic digestion

Newcastle Borough Council wanted to increase recycling targets due to rising landfill costs. But with cash in short supply, funding the move to anaerobic digestion promised to be a challenge. Now the council collects between 70 and 80 tonnes of food waste from all 54,000 households in Newcastle under Lyme every week. 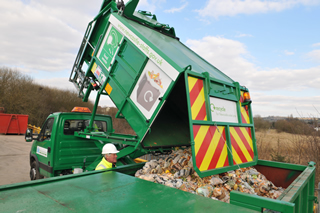 After three years of research, Newcastle decided that the best way to dispose of food waste was through anaerobic digestion. This is because - rather than just producing a compost - it produces energy as well.

Newcastle went out to tender for a five-year contract to supply that service, looking at ‘waste miles' - that is, the distance that waste would have to be taken by road - as one of its priorities. The plant at Lower Reule is on a farm in Staffordshire, not far from where the food waste is being collected in Newcastle under Lyme.

The majority of the funding came from cost savings made by changing the way waste was collected. The council has saved £200,000 from its waste collection budget by:

This worked because by introducing food waste and promoting recycling, the council saw a weight reduction in refuse bins of about 37 per cent. So residual waste bins would be half empty if they were collected every week anyway.

The Waste and Resources Action Programme (WRAP) provided £290,000 to cover the cost of containers. Each household was given:

The council wanted to increase recycling targets because of the increased cost of landfill, but wanted to do it sustainably for the long term.

Because waste is an emotive subject, about three years ago the council formed a cross-party working group. This has stopped the issue being used as a political football.

In the run-up to introducing the service, the council issued huge amounts of communication to residents in various formats, such as:

The waste team also had an open meeting for councillors so that they could see what was happening to waste and reassure their constituents at surgeries.

Vermin were a potential problem. But they cannot get into the containers because of the design. The handle has to be at a 45 degree angle for it to be opened. One squirrel tried to eat into the bin but failed.

Residents are supplied with bins and caddies so that they can put out their food waste for collection. But there are no penalties in place if they do not, and the council cannot force them to take part in the scheme.

More people may have taken part sooner if there had been more communication. After eight months of the service beginning, it was estimated that about 75 per cent of residents are taking part.

Residents often think councils collect waste separately but take it all to landfill or incineration. The more you can explain to residents how it is being used and what the benefits are, the more they take part.

The number of people putting out their food waste has increased but the quantity of waste has decreased slightly. This is because residents are more aware of the amount of food they waste and this is encouraging them to change their buying habits.

"Food waste collection is one of our most popular services, the other being paper. In both of these we have highlighted the local use being made of the material and benefit to the environment. We have not found the service too expensive, and as it is a popular service it has encouraged an improved take up of our recycling services. This now exceeds 50 per cent.

"Food waste ticks all the boxes. If all food waste was turned into power using anaerobic digestion there would be a considerable saving in the importation of gas. Experts differ as to the exact saving but it is at least 20 per cent."

At full capacity the plant at Lower Reule will process 30,000 tonnes of food waste, producing electricity for about 1,400 houses. Ian Critchley of Lower Reule Farm, says:

"The AD plant offers a very exciting diversification opportunity for the farm. Not only do we have products to use and sell in the form of power and biofertiliser, we also have excess heat available to extend our existing strawberry business or possibly set up another enterprise."