Torrs leads the way in providing a community hydro scheme

The UK's first community hydro scheme in Derbyshire is a prime example of local supply and demand. The electricity produced by the weir is used to power a nearby supermarket. 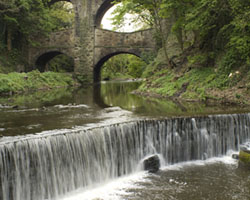 The Torrs Hydro community energy project uses an Archimedes screw with a maximum power rating of 63kW. It is located where the River Goyt and the River Sett join in New Mills, Derbyshire.

The project cost approximately £330,000. About a third of this came from more than 200 people and businesses taking shares in the scheme. The rest came from grants from the East Midlands Development Agency, the Cooperative Fund and the Sustainable Development Fund totalling around £165,000. There was also a £70,000 bank loan.

It is run by Torrs Hydro, New Mills Ltd, an industrial and provident society (IPS), set up with the support of social enterprise Water Power Enterprises.

The project was originally discussed between New Mills Town Council and the social enterprise. But when Friends of the Earth local Group Coordinator Richard Body heard about the project he says he immediately and instinctively knew he had to help it succeed. He felt a hydro system that harnessed the free energy of the water was an opportunity not to be missed. So when the council backed off because of concerns about borrowing money to pay for it, Richard and like-minded enthusiasts kept the project alive.

Finding enough investors for a share offer is not easy, so the IPS bought in some professional PR help to promote the offer. This meant the scheme was in the local papers throughout 2007, and also on national BBC television and radio. There were also tours of the site to show potential investors what was planned, and a detailed website.

Installation was complicated. The specific location on the water that was chosen for the reverse Archimedean screw did not have good access, which pushed costs up. Around £4,000 was needed to pay for a crane to lift equipment into a difficult space and that extra effort added time and money onto the construction process. However, it would have been a false economy to find an easier site because positioning of the equipment is paramount. This particular hurdle was specific to Torrs though, and every construction process will be different.

Don't underestimate the size of the job, because setting up and running an IPS is challenging. Body, who is Director and Secretary of Torrs Hydro New Mills Ltd, said:

"If we'd all known how much work it was going to be before we started, we may have considered backing out and letting someone else do it. But of course we are glad we didn't.

"People need to know that it is achievable, but you need people who are willing to stand up and be counted. You have to be committed to it. It is not just a hobby to fill a spare weekend. It is very involving, but the rewards are huge too.

Body added: "When I look at it from the bridge, I feel proud that I helped shape how it turned out. I know of groups that have referred to their project as ‘doing a Torrs hydro', and that pleases me. I almost get more pleasure from knowing we have inspired others."

On average the system produces 60-70 per cent of the Co-op supermarket's electricity needs over a 24-hour period, and also collects excess to sell back to the grid during the night when the Co-op is shut.

In the first two years of operation, the system generated an average of 150,000 kWh a year because repairs and low water levels hindered production. Body says they ultimately hope to generate around 240,000 units a year, which he equates to roughly £24,000 of electricity.

As for profits to spend locally, they hope to earn £2,000 to £3,000 per year by selling back to the grid. But when the loan is paid off there'll be an extra £10,000 annually, which could go towards insulation of community buildings, regeneration work, environmental education or energy saving initiatives, for example.

The scheme has also boosted tourism as many people visit the area to see the screw in action. And the local economy has benefited too. Around 60 per cent of the construction costs were spent in the area. For example, a local company built the sluice gate, and since then has received several orders from hydro schemes elsewhere in the country.