What is mobile connectivity?

There are two ways people can connect to the internet when they’re away from home or work, using mobile phone networks or wifi public hotspots.

Mobile phone networks allow devices containing a SIM card (phones, tablets, modems/ dongles, etc) to make calls, send and receive messages, browse the internet, stream audio and video and use apps on the move. They are provided and operated in the UK by four main commercial providers, known as Mobile Network Operators (MNOs):

In addition, there are more than 60 Mobile Virtual Network Operators (MVNOs) which use the networks owned by the MNOs. These include:

There are four main mobile infrastructure providers (some owned by mobile operators themselves), who do not provide retail services, but build the masts that MNOs use.

A number of other companies also offer ‘neutral host’ infrastructure, including FreshWave, Densre Air and BT Wholesale, which can be used by any mobile operator.

Before you sign up to a mobile phone contract, it is vital to check the mobile coverage each MNO provides in the places you live, work and visit as each will be different.

Indoor 4G coverage from all four operators by council area 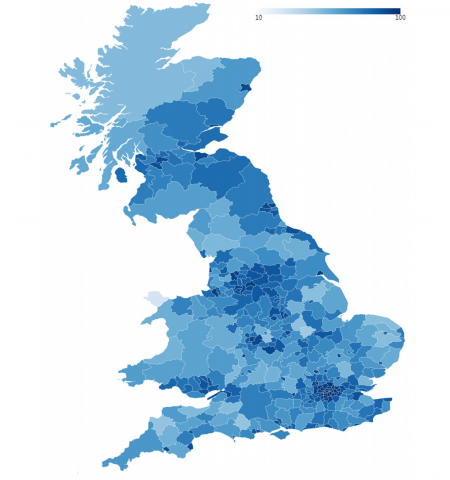 Ofcom reports that national mobile connectivity is improving, but country-wide coverage figures tend to mask the deep disparity between coverage in urban and rural areas. When disaggregated, 83 per cent of urban homes and offices have complete 4G coverage, whereas the figure for rural premises is less than half that (41 per cent). In some remote parts of the country, there is no coverage at all.

Each network provides a different service and has its own coverage checker. Ofcom also has an independent coverage map allowing data coverage from different providers to be compared: https://checker.ofcom.org.uk.

There is disagreement on the accuracy of mobile coverage maps. Much of the coverage data is generated by computer modelling rather than real life testing. As such it does not always reflect consumer experience on the ground. Gaps in coverage, ie where residents suffer from partial mobile coverage, where not all mobile network operators cover an area, or not spots, where a mobile phone will not be able to make a call on any network, can occur in both rural and urban areas. A lack of coverage can lead to dropped calls – when your mobile call unexpectedly cuts off, or prevent your device connecting to the internet.

Mobile phone networks use several types of technology. The technologies are rarely referred to by their individual names. Instead they are grouped into families and named after the ‘generation’ in which they were introduced, with each ‘generation’ being introduced roughly a decade after the previous one. Each network is faster, more secure and more reliable than the one that preceded it. All modern ‘smartphones’ support 2G, 3G, 4G and more are now supporting 5G.

Mobile phone networks are made up of cells (which is why the Americans call them cellphones). Each cell has one or more base stations that transmit the data to and from mobile devices.

Only a minority of base stations are sited on masts, although the term ‘base station’ and ‘mobile phone masts’ are often used interchangeably. Mobile networks are made up of a mix of different types of infrastructure – ground-based masts, rooftop equipment and small antenna – and most of this infrastructure is unnoticed by passers-by.

Base stations are sited to maximise coverage in a local area and there are many factors affecting where they can be sited. Also, as cells only cover a limited area and can only handle a finite amount of traffic, their layout is primarily driven by customer demand.

Mobile infrastructure - a range of shapes and sizes

The design of cells and the location of base stations or transmitters vary in size and shape for all sorts of reasons:

• where the base station can be sited, especially its height above the ground. This can be affected by:
◦ planning considerations such as conservation areas which may impact the installation of base stations
◦ access to electricity to power the radio transmitter ◦ the layout of buildings.

• the shape of neighbouring cells whose radio transmissions could cause interference.

Lots of factors limit mobile connectivity, either slowing it down or stopping it altogether:

• phones and tablets have low-powered batteries, so thick walls, hills, or other buildings can interfere with their ability to send a signal to the base station

• simply having too many people trying to connect in the same cell at the same time can make it impossible to connect: a device apparently displaying that it has a good signal may be blocked from starting a new connection (anyone who has been to a football match, large concert, a busy shopping mall or got stuck in a traffic jam will have experienced this).

Mobile Network Operators (MNOs) admit it can be difficult making a commercial business case to build new mobile infrastructure in rural areas in which fewer ‘paying customers’ work and reside.

However, recently MNOs have put forward a joint commercial proposal to Government to form a new “Shared Rural Network” (SRN) to improve rural coverage. The proposal commits all four operators to improving their network coverage to 92 per cent of the UK’s geography by 2025 with an aggregate of at least one operator covering 95 per cent. This will be achieved through MNOs opening and sharing existing masts and infrastructure between each other.

The SRN will also include a £530 million publicly funded scheme in areas that are not commercially viable for MNOs. The Government has committed to formally signing up to the proposal by April 2020.

The LGA welcomes the SRN as a positive step forward from the industry. However it has called for Ofcom to clarify how it will hold MNOs to account on their yearly progress up to the 2025 target.

The next big thing in mobile connectivity is 5G. Two companies, EE and Vodafone, have already launched 5G networks on a small scale in the UK, with O2 and Three due to do the same later in 2019.

5G will enable exciting new services and applications including:

• industrial applications, enabling businesses to improve their productivity, for example through predictive maintenance and real-time analytics

• Internet of Things (IoT) services, many of which will help councils and businesses deliver services more efficiently including:
- transport and logistics: connected parcels and fleet tracking
- health and social care
- environmental monitoring: sensors monitoring air quality and water pollution in real-time
- smart agriculture and smart animal farming, smart retailing
- connected and autonomous cars: allowing cars to communicate with each other, other road users and even the road infrastructure.

The roll out of 5G presents opportunities for councils:

The first wave of the 5G roll out will see MNOs re-use existing sites to install the new infrastructure. Eventually, to widen coverage further, they also need to install lots of new base stations as the cells are smaller. These could even be on lamp-posts, though this may not happen for some time after the initial roll out of 5G.

More importantly, due to the way 5G works it is closely connected with the Smart City agenda and will enable centralised control of lots of different street infrastructure owned or managed by councils, such as street lights, water meters, and bus stops.

The Government is funding trials for 5G technology in Liverpool, Bath, Bristol, Worcestershire and the West Midlands as well as rural trials in Shropshire and Somerset.

Wifi hotspots work in much the same way as domestic wifi networks – they enable a wifi enabled device such as a phone, tablet or laptop to connect to a broadband signal if it’s within range of the access point.

In 2014 the UK had one wifi hotspot for every 11 people. They are operated by many different providers and can be found in public buildings such as museums, libraries, town halls and on public transport, as well as in private locations such as restaurants and cafes.

Many hotspots are operated by mobile providers, others by broadband providers, some are city-wide such as the CityConnect service provided by the City of York Council.9 BT is replacing its phone boxes with InLink units which offer ultrafast wifi as well as device charging, a 999 service, information via a touchscreen tablet and 55 inch screens.

Most wifi hotspots require a user to register. While some are free, others are commercial services. Some place a restriction on what internet services they will allow. Free networks often serve advertising to users, use their details for marketing, or sell their details to third parties.

There are also risks of using public wifi as the security can be lax or non-existent. A properly set up wifi network will have encryption to protect users, but there’s no guarantee that a public network will be using it. It’s possible that hackers might try and use security vulnerabilities to snoop on users’ traffic, steal their details, or, worse, distribute malware or viruses to their computer