Every year the four political groups at the LGA invite parliamentary representatives from the House of Commons, House of Lords to be our Vice Presidents. 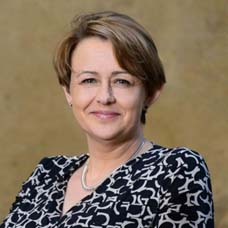 Britain's greatest ever Paralympic athlete, Tanni crowned a magnificent career with two gold medals in the 100 and 400 metres in the 2004 Athens Paralympics. It took her remarkable medal haul over 16 years and five Paralympic Games to 11 gold, three silver and a bronze and established her as one of the most gifted and courageous sportswomen of her generation.

Her exploits at the Sydney Olympics earned her the BBC Wales Sports Personality of the Year Award and her enthusiasm and determination in the face of her physical handicap has made her an international sporting hero and increased awareness of Paralympic sports.

Away from the track, she has played an active role in administration over the years. Among her roles: Vice-President of the Women's Sports Foundation; a member of the United Kingdom Sports Council; a patron of the British Sports Trust; member of the 2002 Manchester Commonwealth Games Organising Committee; and board member of the London Marathon. In 2003 she was awarded the Freedom of her home city of Cardiff.

In 2010 Tanni became an independent peer in the British House of Lords, taking the title Baroness Grey-Thompson of Eaglescliffe. As a working peer Tanni uses her experience and knowledge during debates in the House and she has spoken on a range of issues including disability rights, sport, welfare reform and local government.

Tanni was elected as LGA President in July 2021.