Manchester’s biennial festival has attracted major artists and delivered large-scale and innovative events and activities, which have put the city on the national and international cultural map. This case study forms part of the Value of culture - regeneration section of our online Culture Hub. 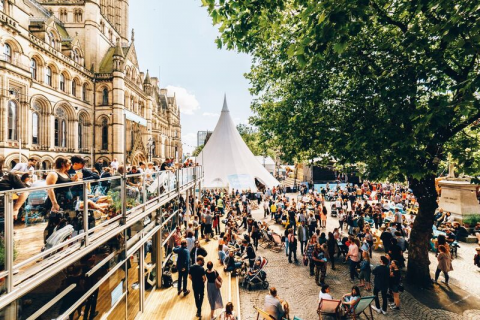 Manchester International Festival launched in 2007, as a legacy project built upon the success of the Manchester Commonwealth Games. The festival is the single biggest cultural project Manchester has as a city. It has been held every second year, with the sixth festival held in 2017.

The festival is led by a chief executive officer and artistic director, supported by a dedicated team and overseen by a board of local and national organisation representatives from both the public and private sectors.

Following the success of the International Festival over the last decade, funding has been secured and construction is currently underway for ‘the Factory’ – a new home for the festival which will complement the biennial festival with year-round activity.

The format of the festival has always been biennial, with 18 days of commissions and events taking place in a broad range of venues across the city. The festival combines local artists and stories with national and international artists. In 2017, the festival hosted artists from China, Pakistan, Egypt, Iceland, United States, France, Germany, India, Austria and Canada. Many productions also go on tour from Manchester to be presented across the world.

Alongside the core delivery staff, the festival attracts a large, committed group of volunteers, helping to manage and deliver the programme. It has also had significant success in attracting corporate sponsorship.

The international festival also supports education and skills through a creative learning programme, which in 2017 worked with 68 different education partners through 57 of the festival performances.

Maximising delivery resource: the International Festival has been very successful in securing substantial funding from a range of public and private sources, avoiding over-reliance on any funders. As well as substantial private sector contributions, funding from co-producers and significant sums from ticket sales, it has helped reduce costs through an extensive volunteer programme. By keeping the festival biennial and maintaining very high quality and prestige, the festival can remain an attractive funding proposition.

Having a ‘USP’ (unique selling point): Manchester International Festival has a strong USP is that it is an artistic-led proposition to create projects on a large scale that are artist-led, experimental and innovative. That has enabled the production of internationally renowned work that has, in turn, enabled the festival to have a global reputation.

Proactivity at senior levels of the city council: the festival has highlighted the ‘can do’ nature of the council, and its boldness in new activities and initiatives that help attract attention to the city. In a short space of time this has enabled the reputation of the festival to grow internationally, and bolstered the perception of Manchester as a thriving city of opportunities.

“Manchester wants to climb the ladder as a top European city. Without a cultural offer that’s engaging to the outside world and to your own residents, we won’t be able to achieve it. Culture has a huge impact on the dynamics of a city, from creating jobs and wealth through to people’s wellbeing and social mobility.”