On the edge of care: Keeping vulnerable young people safely in the community

Taking a child into care has a significant impact on them, their family and their community. Brent Council wanted to develop their support for children, young people and their families. The aim: wherever possible to keep them safely with their families and in their own community.

Fiona Kivett is a Change Manager at Brent Council. In 2017 she applied for the LGA and Design Council’s Design in the Public Sector programme. The challenge the council had in mind: finding innovative ways to keep at-risk young people safe in the community with the aim of reducing the number becoming looked-after-children (LAC). The council saw the application as a great way to get a group of people from across departments and services at the council involved in a design-led way of working, learning from their peers at other local authorities.

Being in a different space from the usual working environment was a great way to both get people thinking differently and to build momentum at the beginning of a complex project.

Domestic abuse, teenage involvement in gangs, and a combination of domestic abuse, mental ill-health and substance misuse are the primary drivers behind many social care placements for children in Brent. In many of these scenarios, early intervention can have a positive impact on the situation and allow a young person to stay at home safely. Brent Council wanted to make sure that all avenues for supportive intervention were explored specifically for the group of young people who had been identified as being ‘on the edge of care.’ Earlier intervention in these cases would aim to address issues, prevent escalation and result in better outcomes for those children and young people and their families.

The council had carried out a review which showed that 31 per cent of new LAC placements were potentially avoidable with a different approach or earlier intervention.

Their challenge was to understand what kind of earlier intervention would work better and to involve the right professionals at the right time to make it as effective as possible.

The council recognised that to accomplish this, they would need to bring together many different services and agencies. They would also need to achieve a sharper focus on the needs of the young people and families they were supporting. They saw a role for design thinking in solving both those problems.

“We know that we need to embed creative solutions into our daily working.” says Fiona Kivett. “The difference the Design in the Public Sector programme made, was to help us to understand better, not just the situation of the young people we were trying to help, but the role of the community in any solution.”

It wasn’t an easy challenge for the team to tackle. “It felt tough,” says Fiona, “During day one and two of the programme we were further behind the other groups, trying to work out how to approach engagement around this sensitive issue.” The team practiced techniques that helped them to reframe the challenge and identify opportunities for intervention. The double diamond created a map of the stages they needed to go through to achieve their goals. Another exercise, to create a concept poster, helped them visualise the problem by creating aspirational headline achievements in five or ten years’ time. “It was also great to have the Design Associates there,” says Fiona. “Jonathan Ball spent time in one-on-one conversations with us, both at the workshops and outside of them, helping us understand some of the most complex parts of the challenge”.

Outside the programme, the team set to work using some of the new techniques they had learned. Journey-mapping gave them new insights into the events and interventions in a young person’s journey into care.

“The programme taught us to continue to ask questions throughout the whole process, and to keep returning to our challenge statement.” Fiona Kivett, Change Manager, Brent Council

Using techniques such as semi-structured interviews, Rose, Thorn and Bud assessments, and journaling the team started to have more in-depth conversations with their customers, from professionals in agencies to parents and young people themselves. Because of the sensitivity of the issues involved, the team employed a test-and-learn approach. Willing care leavers took part in workshops to feedback on the process and make sure it was empathetic.

Their research uncovered a rich seam of insight about the lives of the people they were trying to improve. The professionals they spoke to told them of both gaps and overlap in the provision, and a lack of consistency in measurement. Parents wanted to know how they could to get their children to listen to them. Issues raised included difficulties engaging fathers in their children’s lives as well as children’s constant attachment to their electronic devices. Talking to looked-after-children and care leavers revealed that they cared deeply about many things; school, family, sports, health and wellbeing, and their friends were high on their list of priorities. But they were also anxious about basic things like money, sleep, the environment they lived in, their future, and in some cases just ‘staying alive’. 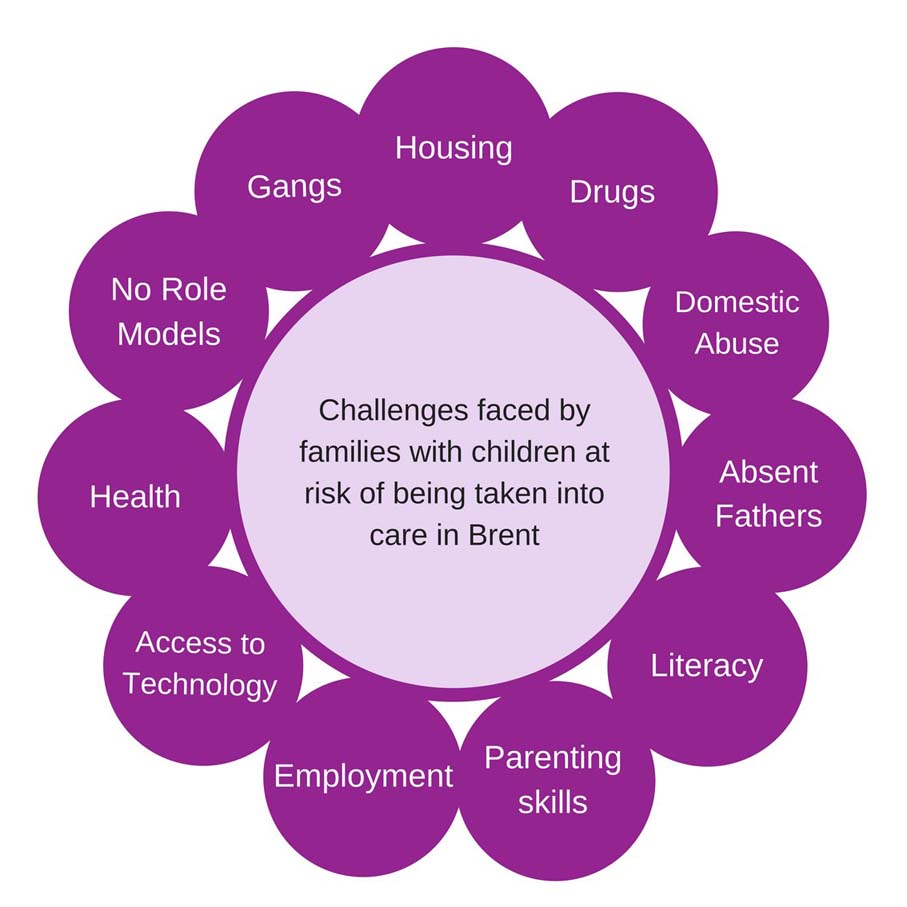 Reframing the problem to generate ideas

One of the first results of the programme was the large number of practitioners and members of the public it enabled them to engage with. Shirley Parks, Head of Forward Planning, Partnerships and Performance for Children and Young People, noted that “The programme created the perfect context for us to engage a wide group of staff and partners, including families and young people, in designing and developing our services. It has been great to see a diverse group of people coming together to achieve shared outcomes.”

This shared process generated many new insights, with which the team were able to embark on a process of sense-making and synthesis. They created new problem statements that were to prove the catalyst for an avalanche of new ideas generated by stakeholders at workshops and visioning events. “Concept posters and a technique called Round Robin were extremely good at creating energy in the workshops to come up with lots of ideas in a short space of time,” says Fiona.

The sensitive nature of the project and the need to get it right with the vulnerable people involved means it has taken longer than originally anticipated to prototype and launch several solutions. “We’d used prototyping before, but through this process, we realised that as a technique it can take many forms, and doesn’t always have to be on a massive scale,” says Fiona. “By running small experiments we were able to get ideas off the ground more quickly.”

Solutions the team have started designing, prototyping and testing include:

“The approach and techniques are helping us to challenge conventional thinking and to ensure that the life experiences of young people are at the centre of our creative thinking.” Shirley Parks, Head of Forward Planning, Partnerships and Performance, Children and Young People, Brent Council.

Supporting young people on the edge of care is a sensitive and complicated task. The Design in the Public Sector programme helped Brent Council to ensure that the voices of the people most affected were at the heart of the creation of new services to support them.