Must Know: Treatment and recovery for people with drug or alcohol problems

As elected members, you are ideally placed to champion investment into reducing drug and alcohol harm in your local area, engaging the local community and collaborating with officers. The purpose of this guide, developed in partnership with Public Health England (PHE), is to raise awareness about drug and alcohol related harms and empower councillors by providing an introduction to treatment and recovery services, key considerations, signposting to useful resources, as well as any questions you need to ask to support effective decision making.
Public health
28 Jul 2021

People with untreated drug and alcohol dependencies have a disproportionate impact on our communities.

In an average secondary school in England 40 pupils will be living with a parent with a drug or alcohol problem. About one in six Child in Need assessments carried out by local authorities last year record parental alcohol problems, with a similar proportion for drug use. And problem parental alcohol or drug use were each recorded in over a third (36 per cent) of serious case reviews where a child died or was seriously harmed.

Last year 17,000 households assessed by local authorities as being statutorily homeless were recorded as being drug dependent, with 12,500 assessed as alcohol dependent.

Almost half of homicides every year are drug-related, and in almost a fifth, the suspect is under the influence of alcohol. Nearly half of acquisitive crime is drug-related and one-third of the people in our prisons committed drug-related crimes, including acquisitive crime. Analysis by the Ministry of Justice shows that over half (58 per cent) of offenders had been drinking at the time of the offence, and a third (32 per cent) said their offending was connected to their alcohol use.

More people die from drug misuse every year than from all knife crime and road traffic incidents combined. And more working years of life are lost in England as a result of alcohol-related deaths than deaths from cancer of the lung, bronchus, trachea, colon, rectum, brain, pancreas, skin, ovary, kidney, stomach, bladder and prostate, combined.

Local authorities commission drug and alcohol treatment services through the Public Health Grant. It is a condition of the 2021/22 grant that local authorities improve the take up of, and outcomes from, its drug and alcohol misuse treatment services, based on an assessment of local need and a plan which has been developed with local health and criminal justice partners.

These services, working in partnership with other local services, can and do help thousands of people to stabilise and turn their lives around every year; reducing the risks to the individuals, their families and wider community and the burden on a range of other local services. Every pound spent on drug treatment saves at total of £21 over the course of ten years.

In 2016/17, consumers in England and Wales spent approximately £9.4 billion on illicit drugs. This makes revenue from the drugs industry greater than the UK revenue of such household names as Alidi, Boots or EasyJet.

What investment has the government made to support drug and alcohol treatment?

Funds for the NHS pay for the commissioning of drug and alcohol treatment in prisons, where last year 52,891 people received support for drug and alcohol problems – half of whom said they had a problem with opiate use.

What extra funding have local authorities had this year?

In January the government announced a major new package of funding to tackle drug related crime. This included an additional £80 million for drug treatment which added to the previously announced £52 million that is supporting treatment for people experiencing rough sleeping in 2021 to 2022.

The new money came in the form of universally available grants to provide more support to offenders with drink and drug problems, increasing the number of treatment places for prison leavers and offenders diverted into tough and effective community sentences.

There is also money to support regional and sub-regional collaborative commissioning of medically managed inpatient detox programmes. Inpatient detoxification is suitable for those with the most complex health needs – including severe alcohol dependence – and helps to stabilise or stop drug (or alcohol) use completely. It should then be followed by a period of residential or community delivery support to sustain the changes.

As elected members, you are ideally placed to champion this investment into reducing drug and alcohol harm in your local area, engaging the local community and collaborating with officers.

Your understanding of local communities will enable you to work effectively with officers to ensure that the existing and new funding is applied to meet the needs of local people. This will be vital in achieving the ambition for radically reducing the harms that drugs and alcohol do to our communities.

The provision of active involvement and ongoing and visible support will send a clear signal that tackling drug and alcohol problems is a priority for the local area. The commitment and support of members will also help to ensure that sufficient time and resource will be available to maintain momentum. 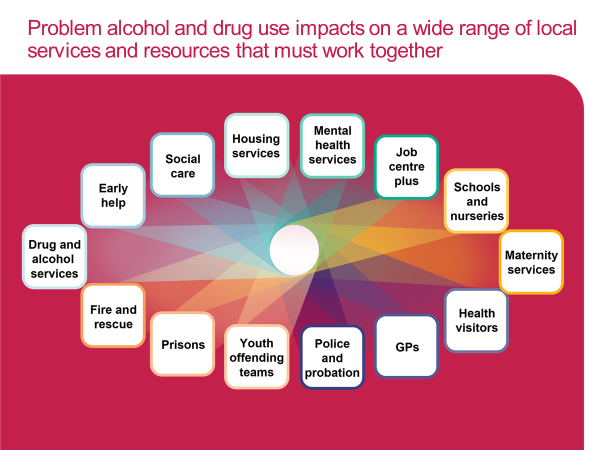 Nationally, Public Health England (PHE) provide a range of guidance and data to support effective local commissioning and delivery of drug and alcohol treatment.  Drawing on data collected in the National Drug and alcohol Treatment Management System (NDTMS), PHE is able to provide a picture of each treatment system and how it compares to those with similar characteristics as well as regional and national averages.

PHE’s regions and centres work closely with Directors of Public Health and their teams to support local implementation and learning.

The benefits of treating drug or alcohol dependence

Drug and alcohol treatment reduces the burden on local authority services. Dame Carol Black’s independent review estimates the costs of drug use to social care at £630 million a year and noting that treatment for dependent drug users can reduce the cost of drug related social care by 31 per cent.

Being in treatment reduces offending behaviour – up to half for alcohol users – reduces drug and alcohol related deaths, and the spread of blood borne diseases such as Hepatitis C. 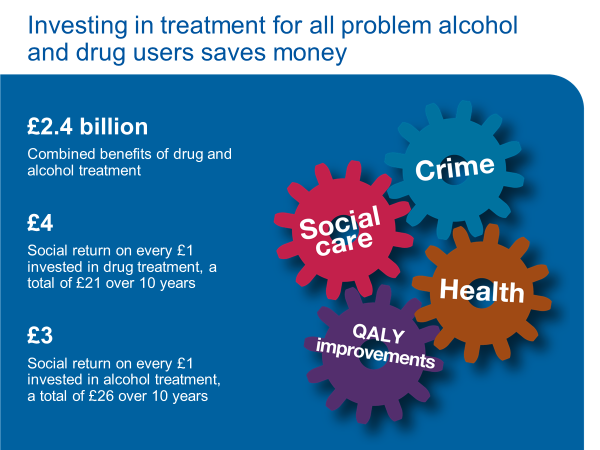 How many drug and alcohol users do we have in our area – and how many of them are currently getting treatment?

What is the profile of people in our treatment system?

High levels of unmet need will have a disproportionate impact on the community.

What interventions do we offer to people as part of our treatment system?

The National Institute for Health and Care Excellence (NICE) have a comprehensive suite of NICE guidelines on drug and alcohol treatment. This includes guidance on which treatment systems are expected to be complied with, and a high-level technology appraisal system on methadone and buprenorphine. This guidance is useful to combat non-compliance which can lead to a legal challenge. This is reinforced by clinical guidance from the UK government and guidance from PHE. Clinical services are regulated by the Care Quality Commission.

What do we do to support people make plans for their recovery?

Recovery from drug and alcohol dependence is enhanced and is more likely to be maintained if it includes support for people’s co-occurring mental health problems, ensuring they have stable and secure housing, something positive to do, and they have family and friends who are supportive and engaged in their recovery.

Independent review of drugs by Professor Dame Carol Black – part 1 focuses on the ways in which drugs are fuelling serious violence and part 2 covers treatment, recovery and prevention