Bath and North East Somerset Council redirected funds from events unable to go ahead due to COVID-19 and used grant funding to pay for 12 installations by local artists in the shop windows of vacant commercial units in the town centre of Bath.

Bath and North East Somerset Council redirected funds from events unable to go ahead due to COVID-19 and used grant funding to pay for 12 installations by local artists in the shop windows of vacant commercial units in the town centre of Bath. The total budget for this scheme was £12,000. The vibrant window installations aimed to minimise the visual impact of void units, and to bring diversity and interest to the high street.

The scheme sits within the context of a two-year programme of intervention of public realm investments and pilots to support the use of pop-up and meanwhile uses within vacant properties. The shopfronts scheme was initially a three-month programme of immediate interventions to specifically tackle vacancy in the lead up to Christmas 2020. 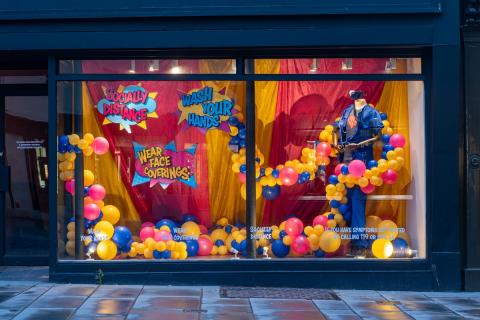 Bath City Centre vacancy rates have been increasing, reflecting national trends of declining retail on high streets. In Bath, vacant units are also often found in runs, and are also often clustered on particular streets such as Milsom Street, which is a key focus of retail and leisure in central Bath and forms a key part of the council’s commercial estate. The most recent manual count of vacant commercial units in Bath returned a figure of 80 vacant units, and the council felt that with some businesses unable to re-open post COVID-19 lockdown, and with many major retailers struggling, the vacancy rate is likely to increase.

Vacant units affect the vibrancy of a streets and impact on pedestrian footfall, particularly at key gateway points and junctions. There are a mixture of types of vacant units in Bath, from modern shop units to listed buildings and former banks. Many vacant properties are also in a poor state of repair and are not in a fit state for full occupation.

Milsom Street was chosen to pilot the project for tackling vacancy in Bath, primarily because of the high level of council ownership of retail property on the street, and the high level of vacancy. The council were keen to attract new lets for the high streets and relaunch the street.

The project was funded from allocations initially earmarked for other projects that could no longer fully go ahead due to COVID-19, such as the Christmas Market. The council were also able to unlock capital money initially identified for other areas of the city, but that could be repurposed for Milsom Street because of the wider commitment to future regeneration in that area. The council made a strong case that by investing in shop fronts and more units then being let, the money invested will be returned. Notably, the council were unable to receive commercial funding, sponsorship or brand any shopfronts, as this required an eight-week process of gaining advertising consent.

All shopfront projects delivered were collaborations with local artists, and focused initially on units owned by the council, third-party owned window animations were also delivered. The council had longstanding relationships with artists through Bath Carnival, but also undertook a tender process in which they retained a strong curatorial role. The funding was used for artist commissions only, which meant the council needed to rely on existing relationships for tasks such as the cleaning of the external shop fronts, which was carried out by the Bath Business Improvement District.

All buildings that received interventions are listed, and there was a risk that business rates would be triggered if the intervention occupied too much space. The council were therefore working within these restrictions in order to rapidly deploy the project and keep costs to a minimum. ‘To Let’ signs were removed, but an agreement was made with the council’s property team to digitalise the advertisement of properties that were available to rent on the council website.

The eventual purpose was to let the properties with a wider goal of high street regeneration. This short-term intervention was made to create interest, and to change the perception of Milsom Street as having a lot of vacancy. This scheme has resulted in a number of new lets in Milsom Street and has set the precedent for further improvement work in the area.

A further impact has been that the shopfronts have attracted more diverse demographic and a culture of ‘selfies’. Pictures of the shop fronts are now frequently used on social media, which has given the council free publicity for the high street.

In addition, from the first 12 installations, two of the units were subsequently let as pop-up shops (even during the pandemic), earning rental income for the council, new tenants said they noticed the units and the attractive shopfronts because of the window animation installations.

The key lessons learned for the council have been to work within set parameters and not to trigger the need for measures such as business rates and advertising consent. This allowed the rapid deployment of the project with no barriers to installation.

Proof of concept on the council’s own estate has also led to buy in from third party property owners who could see the quality of the installations delivered and their positive impact. The early pilot also enabled the High Street Renewal team to demonstrate delivery when applying for grants. The council has subsequently successfully been awarded for a further £35,000 West of England Recovery Fund grant to continue to shop window animation project for the next two years.