Plans have been submitted to replace the failed 1979 Agora shopping centre in Wolverton, north Milton Keynes, with a mixed-use scheme comprised of 115 new homes, shops and a community space. 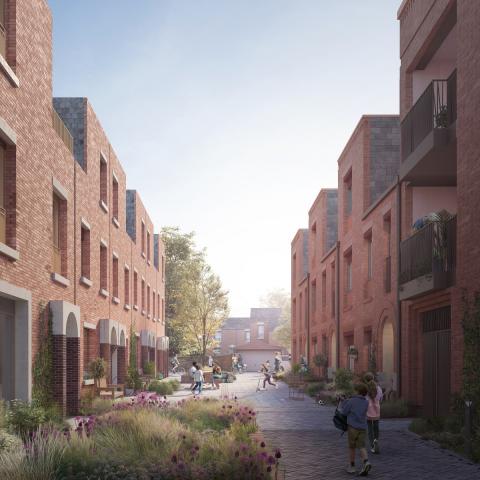 Whatever its status as a visible legacy of the New Town Development Corporation and the optimism it generated in its earliest years, the Agora has proven a long-term social, environmental and commercial failure. Built in 1979 and gifted to the town by the former Milton Keynes Development Corporation, the Agora has divided the town both literally and metaphorically ever since. Many people have described it as “a blot on the landscape” while others say it is now part of the town’s heritage.

The £28 million scheme for developer TOWN promises to deliver homes for rent that will be 7 per cent larger than national space standards and reduce carbon emissions against standard Building Regulations by 70 per cent. The submission comes after last two years of consultation with Milton Keynes Council, key stakeholders and residents of Wolverton which have included an arts-led programme to say goodbye to the soon-to-be-demolished, red brick Agora Centre, referred to by locals as the ‘spaceship'.

The proposed 1.3ha housing-led development will feature new shops and community space laid out around new and reinstated streets. The plans will restore a long-lost street, Radcliffe Street. In total, 86 of the homes will be for market or affordable private rent, ranging from one-bedroom apartments to four-bedroom terraced houses. The proposals also incorporate a new co-housing community for the over-50s featuring 29 one to three bedroom flats with shared facilities.