Sheffield City Council received over £3 million from the Department of Culture, Media and Sport (DCMS) in 2015 to develop a tech hub, as part of the tech north initiative. The grant was given to the council to administer, and through a competition the council chose a bid from the owners of Castle House, a former department store in the north of the city centre that had been vacant for over five years. 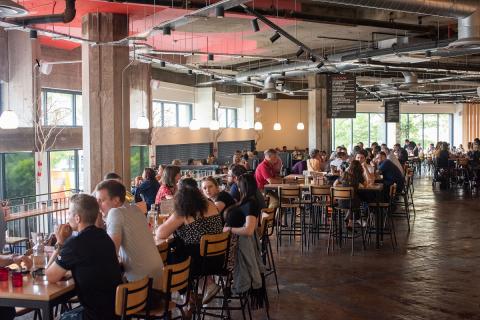 The council chose this project submission because it delivered on multiple agendas, including developing the tech sector but also a place-based approach. The northern area of the city centre had lost its original identity through the consolidation of the once long retail spine, and there were growing levels of vacancy and anti-social behaviour in this area. The council was already working on regeneration projects following work with Marcus Westbury of Renew Newcastle, and felt that the department store was a key landmark that represented the decline of the high street and was therefore in need of redevelopment.

The council moved forward with the project at Castle House, which was supported by the Mayor. The grant funding from DCMS allowed the developer to complete the project in one go, rather than in a piecemeal fashion which is often the case when commercial funding is received. Northpoint were the developer of the building, along with Kollider who are responsible for filling the building.

The council underwent a 12 month process of discussion with the development team to reach a funding agreement about the activity that should happen within the building and the timeframe for success. A user clause, a business plan and activity schedule were produced following the funding agreement.

The development has now been completed, and occupiers have been found for each floor. The basement level is occupied by the National Video Game Museum, which is a charitable organisation that hosts events for schools and coding clubs, the ground floor is occupied by Kommune who provide a food hall which creates a buzz, the upper floors are rented to single desk users and for serviced offices and the top floor is an incubation centre run by Barclays innovation lab. The money received from DCMS was a one-off payment, and the building is now self-sustaining.

One challenge the council faced was assessing business rates for individual tenants. As the building has purposely been redeveloped as a co-working space, it is no longer seen as separate units, but as a single unit, and it is challenging to break this down into separate business rate assessments.

Pre-Covid, the building was 75 per cent let, accommodating 266 full time equivalent jobs with thousands of visitors to the ground floor food hall, Kommune, each week. The building is helping turn round the footfall and reputation of the surrounding area with new private sector development of adjacent buildings already evident and identifying the wider Castlegate area as a destination for tech, creative and digital start-ups.

The council at the time received criticism for accepting money earmarked for tech and using it for regeneration. But the area of Castle Gate had a strategic aim to tackle vacancy within the Renew Sheffield scheme, and this project ended up aligning very well with existing projects. The key lesson was to have used the project to deliver multiple agendas within the councils wider aims for the area.

A second lesson learned was to have a good demand driver, an occupant or use of the building that gives it purpose and identity. Occupiers of the upper floors of Castle House want to locate there because of the sociability and buzz of the food hall on the ground floor, so it’s about creating that buzz that people want to be around.