Telford & Wrekin Council have funded a ‘Pride in our High Street’ grant scheme for small businesses on their high streets. These include a façade scheme to improve the look and feel of the high street, diversification grants to help existing businesses diversify to aid survival, start-up trial grants for market or pop-up shops and empty unit grants for people looking to take on a vacant unit. The scheme is driven by constantly updated research, and this has led to innovative new projects including engaging young people in a High Street Challenge initiative. The funding has come from Telford & Wrekin Council and the total grant money spent through the Pride scheme so far is more than £2 million. 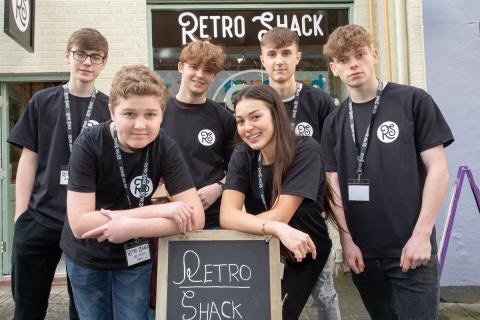 Telford & Wrekin Council initially launched a community-focused grant scheme for high streets in 2016 but the management of these projects was difficult and the outcomes difficult to measure.  The council also saw a rise in vacancy and business closures during this time, and decided to bring a new approach to the challenges faced by high street – the Pride in our High Street scheme.

The council started by identifying high streets that had vacancy levels above the national average, by walking each high street and manually noting each vacancy. These high streets were then targeted for the scheme. Eligibility criteria for grants were also established in order to not displace existing businesses.

The key actions in setting up this scheme were outreach to build local relationships and having a strong marketing strategy in place (including a web page, social media strategy and press releases). Once a database of commercial vacant properties had been established, the council was able to advertise small grants to enable businesses to take on a lease, which the council stipulated had a minimum term of three years. Many businesses contacted the council directly to enquire about vacant property and were then matched with owners through a council-managed dialogue. Many owners of properties also contacted the council directly to let their properties through the scheme, in order to connect directly with a potential tenant.

The council did a lot of free marketing, which was done through an internally-managed social media account. They set up an online directory of local businesses, but the most influential action was establishing the ‘virtual high street’ which the council has found to be more responsive and useful.

The scheme has continued to evolve as the council has carried out research. For example, the lack of interest in larger vacant premises has become evident as these attract higher business rates. The solution was to trial engagement with a landlord of a large high street property and support them to turn the property into three smaller units. Businesses taking on these smaller units may be eligible to apply for a Pride in our High Street grant to assist with the cost of fixtures & fittings and start-up costs.

Another big driver of the Pride scheme has been youth engagement. The council ran a Young High Street Challenge where prizes were awarded to school teams for designs and ideas to help high streets improve. One notable prize was given to an idea for a retro clothes shop; the students were able to select a vacant unit and were given a £20,000 grant for fit out and initial operating costs.  The students now manage all aspects of the shop themselves, six days a week, providing further opportunities for acquiring new enterprise skills. Other winners of the challenge developed ideas for Wellington Market and the creation of a youth zone to include staging for musical events. This new area will be unveiled later in 2021.

The project has been deemed a huge success and the council will continue to invest in the scheme. There has been a large reduction in the number of vacant properties on the high street, but an even greater social impact in that businesses and therefore jobs are supported, and young people are gaining new skills as well as taking an active role in shaping how the high street evolves.

The scheme is entirely informed by research which was useful not only in building the initial case for running the scheme, but in how the scheme then evolved and in deciding which new and innovative activities should be undertaken.

A key challenge for the council was engaging absent landlords, and the council are trying to overcome this by offering to update the external facade of these units as an incentive.