Co-production and collaboration with stakeholders and communities is one key element that contributes to the success of interventions and programmes.

Through co-production methodologies and collaboration with local stakeholders, the Lewisham Trailblazer is creating an environment to enable interaction between health campaigns, local businesses, and the community.

The London Borough of Lewisham is working with advertising industry partners Outsmart, JCDecaux and ISBA to reduce high fat, salt and sugar (HFSS) adverts across out of home advertising in the area. The trailblazer is looking at restricting HFSS whilst simultaneously developing and displaying healthy eating messages across the borough. These healthy eating messages have been co-produced, through work with Lewisham’s Young Mayor’s team. The Lewisham Trailblazer is also seeking to work with local food businesses and community groups to create a shared narrative of healthy eating and develop more culturally relevant and easily accessible nutrition resources.

Gaining the insight of, and working with, young people is central to the programme’s activities. As young people are key stakeholders in the programme, young people should be offered an active opportunity to contribute their views to ongoing discussions about childhood obesity. The Trailblazer therefore wanted to empower Lewisham’s own young people in the creation of healthy-eating posters which aimed to target local businesses in order to encourage behavioural change. Initially, the aim was for the posters to target local high street businesses and encourage them to become ‘Sugar Smart’. Sugar Smart is a Sustainable Food Places campaign working with organisations, councils, businesses, schools and other sectors to help reduce overconsumption of sugar in their communities. Due to the impact of the pandemic on local businesses and general street footfall, the campaign took a broader focus on themes of community, caring and choice. 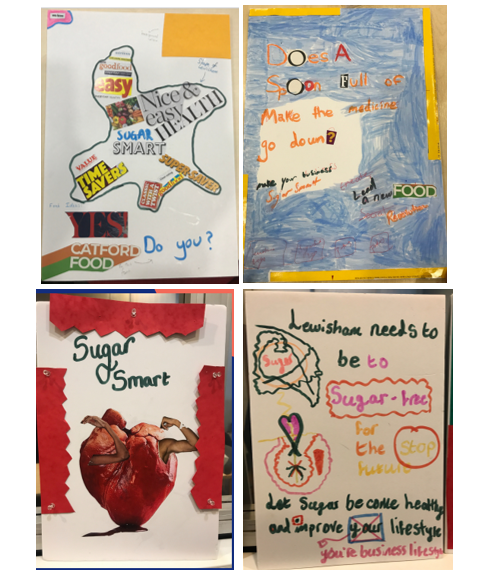 The team act as advisors to the young mayor, helping to advise policy and decision making, while also looking to engage and upskill local young people in youth democracy. The Young Mayors team worked with a group of 12 young people in weekly 90-minute sessions across a period of two months. A lot of time was dedicated to developing a shared understanding of the aims of the exercise and to providing a space for the young people to get to know each other. The team were keen to ensure the whole process was as fun and creative as possible to encourage young people to engage.

During the process, advertising partners, Outsmart, spent some time working with the group to provide an insight into the advertisement sector and encourage the young people to see themselves as creatives.

Once complete, the posters were then sent to a local, young graphic designer who created one digital poster containing key themes from all the posters that were created.

What has been developed? 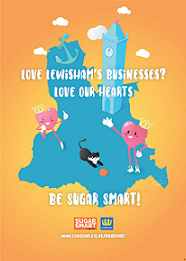 The poster has now been placed on 12 digital boards in Lewisham.

Each digital screen is in a high footfall area such as local highs streets and shopping centres.

The trailblazer is hoping that fewer COVID-19 restrictions in the latter half of 2021 will mean the poster will be in the public eye significantly more.

Large copies of the poster are now being printed to be placed on billboards and advertisements in the borough.

The impacts of the process on the team involved

The output of the co-production process was not the only achievement of the process. Giving young people an opportunity to be engaged in something that involved third sector and public sector organisations was seen as a major benefit to the young people. As well as providing a creative past-time, the process allowed the group to learn more about the borough they live in, the wider work of the council and partners, and to develop their understanding of the wider determinants of health. A particular benefit was that the young people not only got to learn more about the types of careers available to them, such as those in advertising, they also developed their skills as well. It was also invaluable that young people had the opportunity to create something that sought to have a positive impact on their local community and that they were able to be part of the process from start to finish. For the Young Mayors Team, the council and partners, this process provided an informal environment to learn more about young people’s perceptions of the world they live in as well as their perceptions of improving the health of the local population.