Collaborative videos and an online recycling quiz successfully used to address relevant and common queries from residents and reduce recycling contamination by 2 percent whilst accommodating for increased tonnages across all waste streams.

Reducing contamination levels of recycling resulting from more residents at home and increased tonnages, continuing to promote the waste scheme.

Working with our waste contractor to ensure we are collecting high quality recycling from the kerbside. 63.3 per cent of household waste was sent for re-use, recycling and composting in 2019 (provisional figure to be verified by Defra data period 1 April 2019 to 31 March 2020).

In the first three months of lockdown we saw a rise in tonnage of all waste streams based on figures from the year before (see attached data). Knowing that more residents were now at home due to the coronavirus lockdown, reducing the face-to-face promotional contact that the Waste Team had access to, the team thought of two innovative ways to engage and educate residents on correct recycling behaviours. It was clear that there would be an increased use of mobile phones so there was opportunity to use this platform to spread relevant waste messages.

Firstly, the team launched the “Great Green Recycling Quiz” in June to educate residents. This included the most common non-recyclable items found in recycling bins or those items that residents find confusing. The items were chosen based on crew-reported contamination records and anecdotal evidence fed back to officers at events and recycling talks. Simultaneously, bin crews tagged bins which were contaminated or contained non-recyclable items, letting the resident know the waste needed to be resorted before the bin would be collected.

Secondly, emails and phone calls from residents to the waste team showed that a large barrier to correct recycling behaviours was a misunderstanding of the recycling process. The waste team filmed, created and voiced a series of short videos showing the recycling process from kitchen to transfer station which carefully and clearly explained the issues of contamination and how to avoid them. The waste team made sure to involve all relevant parties when making these videos including collection crews, contractor call centre staff and transfer station staff. These videos were shared on YouTube and social media as part of National Recycling Week and put on the council website.

Initial figures show that throughout lockdown, our rejects at the MRF have been steady at approximately 9 percent, which is a drop of around 2 percent from the same period last year. Anecdotal evidence suggest that residents have learned a lot by taking the quiz in terms of what can be recycled. At this time, 922 of completed responses of the quiz ticked that they were residents of Vale of White Horse district and answers to various questions will be used to feed into future campaigns and literature.

The videos were also well received by residents particularly the one filmed in the transfer station. The waste team’s initial belief that a lack of knowledge of what happens to recycling is a large barrier was confirmed by this feedback. This video has been viewed 160 times, and all four videos combined have been viewed 450 times.

Consistent, clear communication is key, target the middle performing areas in the district as they are most likely to improve. Be aware of resident’s changing habits by reflecting on feedback received and social norms. Offering a clear snapshot into waste and recycling processes will increase engagement and understanding.

What goes in which bin 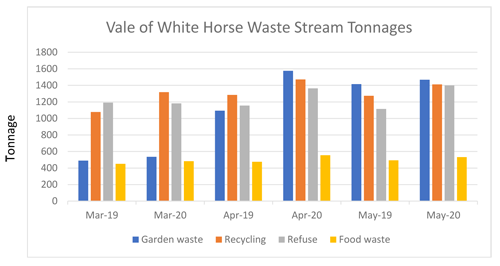 Bin tags were used to prompt people to change their recycling behaviour. The tags used tips to changes people’s habits:

Your bin wasn’t emptied this week