Leeds’ Fleet Replacement programme is designed to identify the lowest emission vehicle available when needing to be replaced. Where possible, this means electric vehicles (EVs) as the default option, however this requires appropriate charging point facilities to support this change. When vehicles are identified as suitable for EV replacement, details of their depot locations are mapped and collated and they’re then replaced, however this was not always straightforward as this case study by Leeds City Council and the Energy Saving Trust explains. 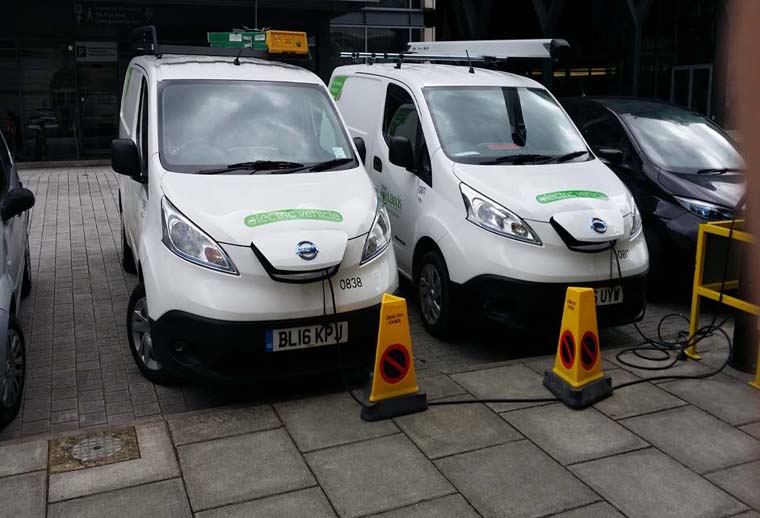 Site surveys often revealed that locations would only be able to accommodate chargepoints for two to four vehicles, unless expensive upgrades to the electrical capacity were undertaken. This created a challenge to the plan for accelerated transition to a zero-emission fleet.

It was determined that a home charging scheme could enable the adoption of more EVs in the fleet to overcome this barrier. A home charging scheme pilot was launched involving 10 vehicles, to trial the operational feasibility of vehicles being taken home rather than stored at council sites overnight. This would require chargepoints being installed at officers’ homes with a mechanism to repay them for the energy consumption of vehicles being charged, this can be done at a significantly lower cost than embarking on depot energy capacity upgrades.

The pilot proved successful, generating highly positive feedback from drivers. Crucially, it also informed the development of the council’s policy for fleet replacement enabling us to embark on ambitious plans to rapidly increase the number of EV’s in our fleet.

Leeds City Council has invested significantly in low emission vehicles following its comprehensive fleet reviews and the implementation of a home charging scheme. This has led the acquisition of over 95 EVs and more than 110 chargepoints to date, with the number of points projected to double across the council estate and up to 250 points being installed at officer homes – therefore enabling us to build rapidly on what is already believed to be the largest public sector fleet of EV’s in the UK.

It is estimated that the fleet of EVs will travel up to one million miles a year, offering significant fuel savings as electricity is cheaper than diesel (4p for electricity compared to 7p for diesel). The investment also hugely reduces the carbon, NOx and PM emissions of our fleet as well as demonstrating exemplar status of the council to key stakeholders across the city. These benefits will continue to aggregate as the fleet of EVs as projected to grow significantly in the next two years and beyond.