Southwark Council identified and enabled the transformation of an underused multi-storey car park into a major cultural and creative hub and workspace. This case study forms part of the Value of culture - regeneration section of our online Culture Hub. 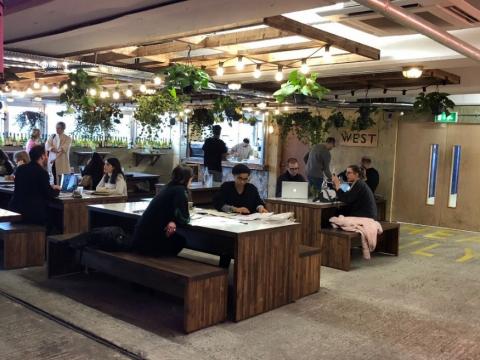 Peckham multi-storey car park, owned by Southwark Council, had been underutilised for a number of years. In 2007, following a competitive process, a 10-year lease for the upper floor was given to arts organisation Bold Tendencies to support cultural activities.

Following the success of this move, which included the establishment of Frank’s Café on the rooftop, art installations and the Multi-Story Orchestra, Southwark Council made the decision in 2015 to repurpose the middle levels of the car park for cultural and creative workspace, establishing Peckham Levels as a cultural and creative hub from ground to rooftop.

Recognising the early success of Peckham Levels and a 5,000-strong community petition, in 2017 Southwark Council extended the lease to Peckham Levels from five to eight years, with the intention to extend to 20 years. Southwark now sees Peckham Levels as a long-term, viable use for the site.

All occupiers are required to contribute at least one hour per week of their skills or knowledge to a community resource scheme, and 10 per cent of profits from Peckham Levels are retained in a community investment fund.

Southwark Council, along with a range of community representatives, contributes to a quarterly steering group and provides advice on key decisions to Make Shift (the operating company), including helping to steer the use of the community resource scheme and investment fund.

Innovative use of council asset: although not an obvious reuse for a multi-storey car park, the staged repurposing of the space through leasing of the upper floor, then the middle storeys, has enabled the creation of a unique facility that acts as a community venue and hub for growth of the borough’s creative and cultural sector, as well as raising the profile of Peckham and attracting new visitors.

Recognising the importance of long-term leases: Providing longer-term leases for the car park and political commitment to this as a sustainable viable use provides greater certainty to operators and firms in Peckham Levels, enabling greater investment and enhancement of the offer.

In-built community benefits: the establishment of the innovative community resource scheme and community investment fund provide clear expectation on organisations joining Peckham Levels, ensuring that social impacts are a core output from all organisations, rather than a tag-on. The council’s continued role on the steering group for Peckham Levels ensures it can help to steer the use of these valuable resources.

“Peckham is fast becoming the cultural and creative heart of south London, and at Southwark Council we have been working hard to build on this reputation and bring new and exciting cultural projects to the area, making sure our local communities also benefit.

“Peckham Levels has transformed a dramatically under-used car park into a thriving and eclectic environment where creative and culinary young businesses offer local people and visitors a great place to socialise, as well as giving back to the community with workshops, work experience opportunities and a range of other initiatives.”