In response to the COVID-19 lockdown restrictions, the Violence Against Women and Girls (VAWG) board in Warwickshire sought to review and understand the emerging needs of victims and survivors to prioritise resources and determine their strategic focus.

In response to the COVID-19 lockdown restrictions, the Violence Against Women and Girls (VAWG) board in Warwickshire sought to review and understand the emerging needs of victims and survivors to prioritise resources and determine their strategic focus. To drive this forward, Warwickshire created a dedicated partnership group – “The Emerging Trends Group”.

This group developed a multi-agency performance framework, aiming to give a more joined-up picture of the need of domestic abuse victims and survivors from across the county. They reviewed, among other things, Warwickshire’s police data of reported incidents of domestic abuse and referrals into the specialist services. Through comparing data over time and between localities within the county, they found that the number of incidents and referrals were quite low in rural communities such as Stratford, in comparison to other parts of the county. Building on this data, and utilising national research on under-reporting in rural areas, Warwickshire made the assumption that under-reporting of domestic abuse was likely to be high in these rural communities.

Increasing the reporting of incidents, particularly in these areas, became a strategic priority for the VAWG board.

What did they do?

To raise awareness, Warwickshire County Council and its partners, which included the Police, the OPCC, Districts and Boroughs, ran a campaign to inform members of the public, victims and perpetrators, about the different forms of domestic abuse and support services available. The campaign ran over 12 months on both social and traditional advertising media.

By looking at the data across the five districts and boroughs, Warwickshire could, in collaboration with the district councils, target communication to specific locations where the level of reported incidents were lower. To ensure the campaign appealed to different audiences, the messages were deliberately segregated by age group (e.g. teenagers, young adults and adults), and by other characteristics such as gender or ethnicity, building on an equality impact assessment conducted by the council. 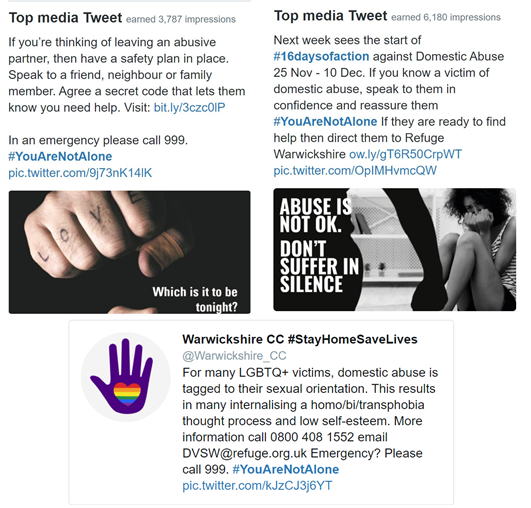 In parallel to the campaign on social media, the council received great support from the local broadcast and print media such as BBC Midlands Today, BBC Coventry and Warwickshire & W, Stratford Herald and the Leamington Courier – to name but a few - who publicised the messages.

This campaign complemented other national and local communications, such as the national #YouAreNotAlone campaign promoting services still open during lockdown, and the local early 2021 Sexual violence campaign co-developed with the local Sexual Health commissioner.

To further increase the level of reporting, Warwickshire sought to improve the awareness of domestic abuse among frontline professionals in public agencies. Warwickshire ran several online sessions on domestic abuse and substance misuse to increase the confidence of professionals to identify these issues and refer to specialist services. An estimated 1,000 practitioners attended.

The council will now build on this initial great engagement to inform practitioners about the Domestic Abuse Act 2021. Targeting 1,000 professionals, twenty training sessions will be held to improve knowledge on the specific new duty around providing safe accommodation, and more broadly, on the wider implications of the bill. “We don’t want to look at this duty in isolation”.  Alongside this training, a partnership impact assessment of the Domestic Abuse Act 2021 will be undertaken to understand which partners are impacted and how, and plan to ensure readiness for the new duties. This will provide Warwickshire’s VAWG Board with a holistic view of Warwickshire’s implementation of the Domestic Abuse Act 2021 across the partners.

For several months, the social media posts gained a majority of Warwickshire Council’s likes and shares. The following tweet was displayed nearly 8,000 times and featured a hard-hitting film, featuring the actress Maxine Peake. The film helped to promote awareness of domestic abuse and highlight the campaign's key message for victims - ‘You are not alone’. 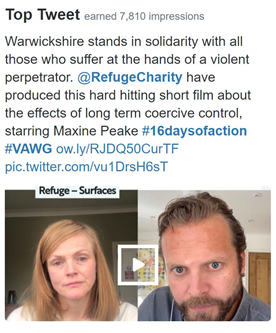 Following the campaign, the council saw an increase of referrals and incidents reported in targeted areas such as Stratford. The campaign is ongoing, so its full impact is still to be evaluated.

One of the objectives of the campaign was to promote a survey to be completed among practitioners to understand the barriers to accessing services and gathering their suggestions on what would improve accessibility. The survey is now informing the domestic abuse needs assessment which is being finalised and will inform the VAWG strategic approach.

This campaign would not have emerged without data analysis having been done in the first place. However, trying to draw conclusive insights on the reporting data such as the number of incidents and referrals can be challenging. For example, is an increase in the number of domestic abuse incidents reported to the police positive or negative? It may suggest that abusive behaviours are more frequent or, that victims are more comfortable to report abuse and ask for help. Warwickshire County Council are aware of the risks of misinterpreting data but believe the increase in reporting has been driven by new victims and survivors coming forward, as it has correlated with their targeted communications campaign.

It is important to know your priorities

The partnership in Warwickshire had a clear shared vision and priority - i.e. to increase the reporting of domestic abuse to the police, which supported multi-agency’s commitment in the campaign.

In its response to challenges arising from COVID-19, Warwickshire County Council has been able to build on well-established and trusted multi-agency relationships. Convinced that everyone has a unique contribution to reducing domestic abuse, the council believes bringing all partners to the table as key. Creating a working group contributed to enhancing trust as it created a safe space for partners to challenge each other constructively and co-develop solutions.