To support council innovation, we have – since 2015 – provided behavioural insights support to local government with the aim of building capacity, capability and understanding of how behavioural science can be used to improve outcomes from local government services. We have worked with over 50 councils across a variety of service areas.

Access resources, assets and reports from our behavioural insights projects

192 people attended this webinar and heard from speakers from the two groups of councils (consortia) who shared the findings and experiences of using behavioural insights to improve local government services in the areas of sustainable travel and health inequalities.

The session was chaired by Councillor Abi Brown, Leader of Stoke-on-Trent City Council and Chair of LGA Improvement and Innovation Board. Cllr Brown set out an overview of the behavioural insights programme offered by the LGA, introduced the speakers and gave a running order of the day. Cllr Brown was joined by:

Although many behaviours were suggested to address health inequality, such as an increase in child immunisation rates or a better uptake of dental health measures, the behaviour that was selected for change was an increase in the uptake of NHS health checks. By conducting both primary and secondary research, including surveys and interviews, it was found that those least likely to attend NHS health check-ups were men between the ages of 40 and 59, with this group becoming the focus of the behaviour intervention.

To decide on an intervention, it was first important to delve into the attitudes, beliefs and behaviours held by the target group, this was done by looking at the results of the survey. From the 12 target behaviours identified they were grouped into three root causes:

Of these factors unawareness was the most prevalent, with over 50 per cent of survey respondents raising this as an issue.

The intervention that was chosen was a targeted messaging and invite campaign, this was chosen by the members of the consortium based on a range of factors, such as data availability, low cost, and prevention of extra burden on the NHS. The targeted campaign involved a text message being sent to the target group to encourage the undertaking of an NHS health check, with this being used to raise awareness, create a sense of urgency, and build a relationship between the patient and the GP. This text message was then followed by a voice note from someone who has recently had the health check and was part of the targeted demographic, this was done to try and further encourage health checks by making it seem more of the norm and address barriers, such as the family first and feeling of invincibility.

The intervention was launched with between one and four partner GPs per borough and ran from early March to late April. Data was collected by reported booking data and observed attendance data and compared to the number of attendees as a proportion of total invites, with 81,790 observations made in total.

Overall, the data suggested the voice note had a positive impact in driving interest and attendance on the target group, with a 20% increase in attendance compared to the control group. However, it was also found that there was a slight negative impact on demographics outside the target group with a decrease in bookings and attendance for women, and older people in particular. From these results a clear recommendation can be made to increase NHS health check uptake, while also considering the potential negative consequences.

From the intervention there are several recommendations that can be made such as the use of demographic and gender specific voice notes to target a variety of groups, with these potentially being available in different languages; and more communication given to increase NHS health check awareness, as this was the most prominent barrier.

There were also a few learnings from the intervention such as the importance of identifying data collection methods early on, especially when working with sensitive data; the effectiveness of working with community engagement officers, particularly in the insights gathering phase; and the value of having a central person in the consortium, responsible for managing and encouraging cross-council collaboration.

Listen to our podcast episode on this project

The consortium wanted to increase active travel, by encouraging people to swap short journeys by car to journeys using a physical means. Active travel has a wide range of benefits including improving health and wellbeing, reducing traffic, improving air quality, and helping to combat climate change.

To formulate the intervention a scoping review was carried out, to find out what barriers and facilitators to active travel exist. From this a range of factors were identified such as physical ability, skills, and knowledge, environmental factors, infrastructure, resources, and social influences, and beliefs about active travel, confidence, and habits. During this review it became clear there was a lack of research exploring the barriers in depth, so six focus groups, framed by the COM-B model, were conducted to further identify capability, opportunity, and motivation barriers. From these focus groups several key insights were gathered, providing clarity that people were aware of the benefits of active travel but felt that potential dangers of traveling in the dark and lack of destinations to walk to were major barriers.

Any resident in Yorkshire and Humber who had access to a car and often used the car to complete short journeys were eligible for the trial. All participants completed a baseline survey and were then randomised into either of the two intervention groups or a control group, with results being gathered with the use of a follow up survey.

Of the 3,673 people who completed, 3,422 were randomised and 1,676 people completed the follow-up survey. The results clearly demonstrated that those who were in the control group showed no difference in the number of active journeys they were undertaking but both the intervention groups did, with the forward planning group showing the greatest adherence. Per 1,000 people completing the motivation and planning intervention an estimated 142 local journeys were saved, this saves approximately 2,067 tonnes of CO2 a year.

These findings will be used to shape future interventions in active travel and as evidence to support future bids. They will also be used to further build the capacity of stakeholders to use behavioural science confidentially and effectively. Members of the consortium have introduced the goal setting aspect of the trial to Bradford’s wellbeing platforms, and Doncaster Council have embedded the behavioural insight findings of the project into the Doncaster Active Travel Alliance and the Get Doncaster Moving Walking Strategy.

From the trial it was clear that the intervention was relatively low cost, easy to implement and the short term nudge can have a positive impact. It also indicated that increasing motivation via people reflecting on their personal reasons/choices/habits can be beneficial to increasing active travel but helping people plan and commit to this is yields more behaviour change.

The key learnings from the trial include the importance of clearly defining behaviour and target audience, keeping the intervention practical and ensuring stakeholders that may need to be involved are warmed up to the idea early on.

Listen to our podcast episode on this project

What was the overall project timeframe for the north east London trial?

From start to finish, the north east London trial was designed and delivered within 10 months.

How did you ensure a representative focus group approach?

How did you decide on what voice notes to use and were the voice notes from actors or patients?

In the north east London trial, the potential issue of an accent bias was raised very early on, as the principle was for people to hear someone like them. A few options were provided, with less perceptible accents being used in the end. Actual patients were used for the voice notes, not actors.

Which behaviour change frameworks were used, and why?

Was infrastructure also invested in alongside the active travel intervention?

Yes. In Yorkshire and Humber, there was a large amount of infrastructure investment via the Department for Transport, which has been used to retrofit old roads and ensuring new ones are fit for purpose. In 2016, a group was set up in Doncaster with everyone involved in active travel, such as planning, transportation and health, to ensure funding is used effectively.

How receptive were GPs in the north east London trial?

This was very challenging as the trial was conducted during the pandemic when health checkers weren’t a priority. It was important to sell the trial, as there’s both a financial and public health benefit to increasing the number of health checks. Flexibility was also very important, due to the capacity issues GPs were facing.

Was any research done into digital exclusion when implementing the north east London intervention?

Digital inclusion was a consideration; however it was found that smartphone penetration was 95 per cent, in those facing deprivation. Although not everyone will access the voice note those who it were targeted would have be able to access it.

How significant was social desirability bias in the Yorkshire and Humber trial?

As the trial was anonymous, it couldn’t be connected to anyone. There could have been some in the focus groups; however, in general, people were happy to share if they were  active travelling.

What are the next major topic areas for BI?

Were attendees asked why they attended the health check in the north east London trial?

This question was not asked, as it would put too much of a burden on GPs. Instead, attendance and booking data was used. 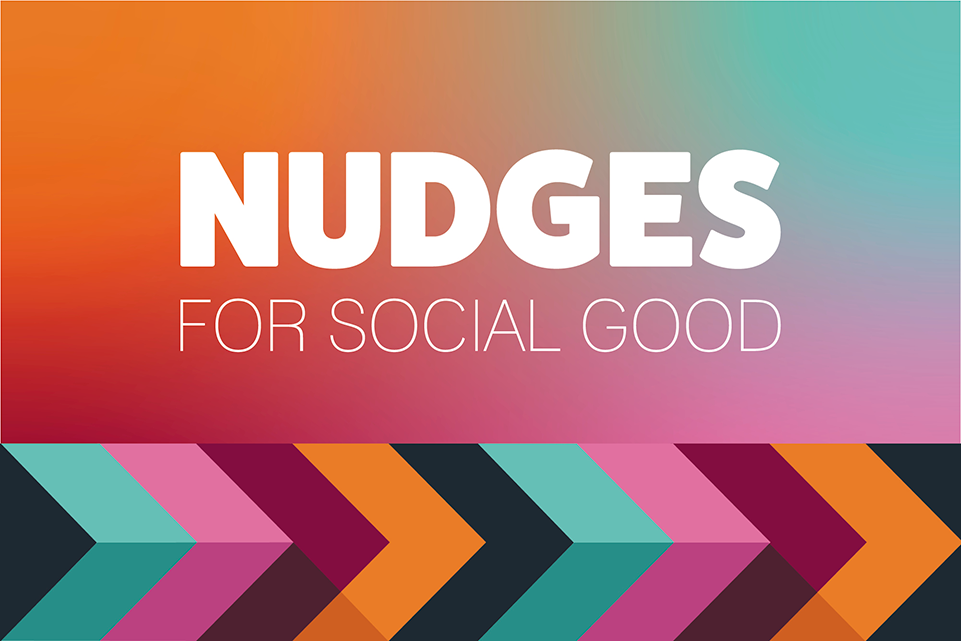 Our Nudges for Social Good podcast explores how councils across the country are using behavioural insights to nudge their residents into different ways of living.