Following industrial decline, Longton, one of six historic towns in the city of Stoke-on-Trent, has suffered. The council appointed a Heritage Champion to lead a successful bid for a Heritage Action Zone, which is helping to encourage residents to move back into the town centre. This case study forms part of the Value of culture - regeneration and Value of culture - cultural planning and strategy sections of our online Culture Hub.

Heritage Champions, an initiative endorsed by Historic England and the LGA, are councillors designated to promote all aspects of the historic environment in their area.

Following industrial decline, Longton, one of six historic towns in the city of Stoke-on-Trent, has suffered. The council appointed a Heritage Champion, Cllr Daniel Jellyman, in 2015, who went on to lead a successful bid for a Heritage Action Zone (HAZ) in Longton which is helping to encourage residents to move back into the town centre. In addition the council has pursued  enforcement action on privately-owned historic buildings across the city and engaged in  conservation work on council-owned historic buildings. The Heritage Champion has been key to driving through this work.

Longton played an important role in the manufacture of china and has the highest concentration of bottle kilns and remaining pottery factories in the city. Following industrial decline, it suffered from residents moving to the suburbs and industry moving to business parks. This has hollowed out the core, which has then affected the town’s retail offer.

Whilst some of the bottle kilns and factories have been repurposed to enterprise space/studios for a resurgent pottery industry, Longton still has a heritage deficit because a number of former buildings that served as shops are empty and in poor state of repair.

Lead by the Heritage Champion, the city council submitted a successful bid for the Stoke-on-Trent Ceramic Heritage Action Zone (HAZ), partnered with the Stoke & North Staffordshire Local Enterprise Partnership and a strong community involvement including the Potteries Heritage Society, Longton Traders, Staffordshire Film Archive, and the Universities of Keele and Staffordshire.

The HAZ aims to help property owners convert the spaces over shops into accommodation, bringing people back to live in the centre of the town and all the economic benefits this entails. It is envisaged that the HAZ will be a focus for social and economic community activities, enhance understanding of the historic environment through public participation, and, most importantly, provide a visible strategic purpose that increases the possibility of similar heritage-led investment. 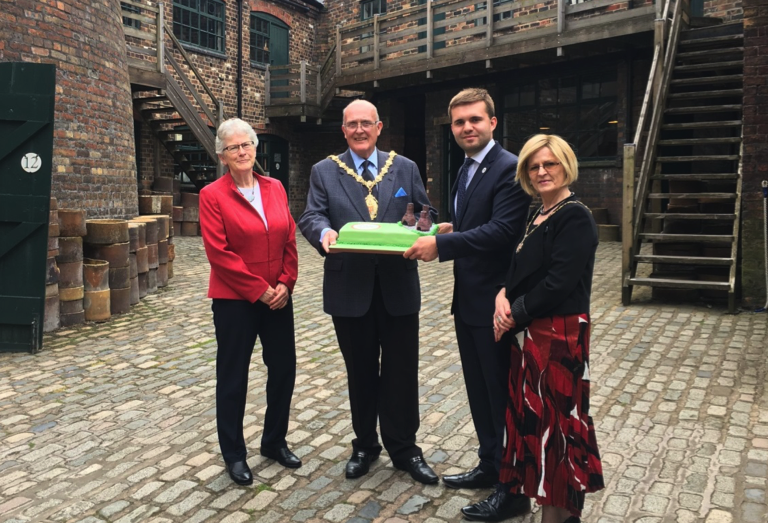 A five-year programme for the HAZ has recently been approved, so it is too early to assess the impact of the HAZ on Longton. But in parallel with this initiative, the growing importance of local heritage can be seen in other ways, influenced by the Heritage Champion.

In addition to the HAZ, the Heritage Champion has played an active part in the design and work programme on heritage assets owned by the council that include the Spode Factory site, Stoke Town Hall, Longton Town Hall, Tunstall Town Hall, the Spitfire at the Potteries Museum and Art Gallery and Trentham Mausoleum.

Works on Stoke Town Hall, a Grade II listed building, included new roofs, windows and electrics, as well as the restoration of original features. They have enabled the council to remain in Stoke by ensuring that the building is fit for purpose, as well as provide an opportunity for income generation through external hire of the facilities for events, weddings and conferences. The costs were met by the city council’s capital programme and Historic England also contributed in part to a number of the exterior works.

Furthermore, the city council has recently unveiled its plans for Longton Town Hall, a Grade II* listed building, which will see the council move some staff to the building.

A strategic priority list for enforcement action in relation to privately-owned heritage building has also been established. This went a step beyond fulfilling the council’s statutory duties by agreeing at Cabinet a list of the top ten Listed Buildings on which they were prepared to take enforcement action.

Work to capitalise on the city’s heritage continues. In Longton the focus now is on implementation of the HAZ’s five-year plan with the recent appointment of a Heritage Action Zone Project Officer. Elsewhere in the city, the council continues to work with Historic England and others to find heritage-led solutions for iconic sites and buildings such as the Wedgwood Institute and the Chatterly Whitfield mining landscape.