Hope Virgo ended up in hospital before getting the help she needed to battle her eating disorder. Today she is a mental health advocate, championing a broader understanding of mental health issues and the need for early intervention.

"My anorexia started when I was 12 years old. From then until 17, my mental health got gradually worse; I became so obsessed with calories and exercise. This progressed until sometime between the age of 16 and 17 I began to lose control, hitting rock bottom shortly after my 17th birthday when my heart nearly stopped and I was rushed to hospital. But by that point I had no choice but to get ‘critical treatment’.

"My anorexia went unnoticed for a long time. No one really knew what it was and when they did find out I managed to find ways to hide it.

"I was not underweight enough to get treatment, but I didn’t really care. I just wanted to be the best at being anorexic as I thought this would make me happy.  Anorexia is not just about weight though, it’s my way of coping with the challenges in my life. It’s symptomatic, a mindset, a way of being in control. No one seemed to understand that I had mental health needs.

"At 16 the school noticed that I’d lost of weight over the summer and got in touch with my mum, asking her to get in touch with my local GP. There wasn’t really much else they could do. I was referred to CAMHS.

"I had to wait four or five months from being referred to when I started treatment. I went once a week not to an eating disorder clinic but to a general, non-specialist, CAMHS counselling service half an hour from my house. I was weighed and had therapy for about an hour in total every week but after seven months it still wasn’t working.

"By this point I was so unwell I didn’t see the point in coming and didn’t work at the therapy. I was undergoing CBT, which I don’t feel is a great match for most eating disorders. My eating disorder is really complicated and is a consequence of the challenges I deal with in my life. What I wanted was someone to talk to who understood my situation and could advise on exercise and diet but it was after seven months of this therapy that I was rushed to hospital and finally received the treatment I needed.

"It took so much work to get better and put weight back on – I was in hospital for a year, recovering, learning how to eat properly, to exercise. I found other coping mechanisms for what else was going on in my life at the time. At 18 I was discharged. I’d reached a healthy weight. I was heading off to university, so turned down the community support I was offered. I wasn’t a child anymore by this point. I have since managed my recovery on my own with the support of my family.

"My school were great while I was hospitalised – helping with my A-levels, and my teacher even came to visit me – but I know this isn’t always the case. If you turn 18 at the beginning of the last year of school you move onto adult mental health services. Having school counselling would have provided the continuity of care until you leave school that’s so desperately needed. If there had been someone to talk to early on, I would have felt so much more in control of what was going on in my life.

"I’ve only relapsed once in the last 10 years and again I couldn’t get support as I wasn’t of a low enough weight. It’s not always about getting skinny.

"Today, I work with schools, colleges and the NHS to talk about my experience so I can help others to come forward and talk about their own experience without getting scared – or support those friends that are going through difficult times."

"I was 14 when my mum took me to the GP for the first time. She was worried as I was self-harming, but the doctor assured her the cuts were just superficial and that I wasn’t distressed enough to need help."

At least one in eight children and young people have a diagnosable mental health condition. 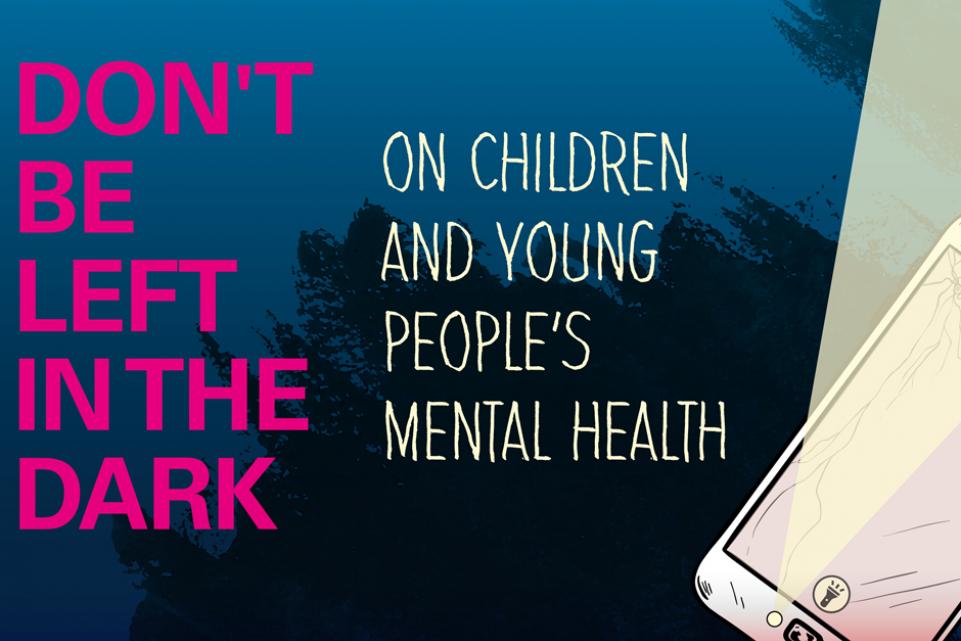 Don't be left in the dark: children and young people's mental health

An overview of the challenges facing mental health and wellbeing services for children and young people.