Without any external funding, the Isle of Wight Council set up pop-up shops in Newport High Street in council owned and privately owned empty properties. This was part of the wider regeneration strategy for the Island.

Without any external funding, the Isle of Wight Council set up pop-up shops in Newport High Street in council owned and privately owned empty properties. This was part of the wider regeneration strategy for the Island. ‘Shaping Newport’ was set up by the Isle of Wight Council to deliver partnership working with Newport & Carisbrooke Community Council and Newport Business Association. 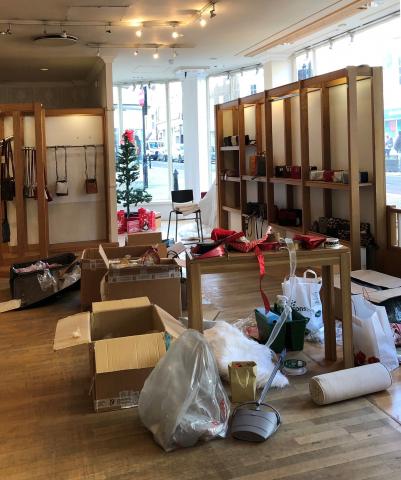 Shaping Newport was initially launched in 2017 with six months of community engagement. A key issue that emerged was the feeling that Newport had a public realm that had become bland, over-regulated and out-of-reach to community activities. In answer to this challenge, Shaping Newport presented three key areas of work, one of which was to revive Newport as a destination, rediscover and celebrate Newport’s identity and create compelling and distinctive reasons to visit, invest and return.

Activities as part of this work included supporting shops and shop-keepers and working to attract footfall as well as supporting the local economy.

This scheme started as a COVID-19 recovery scheme to help grow community resilience, but through the Shaping Newport project it quickly became about reinvigorating the town centre by using empty shops and thereby increasing footfall to other venues. The council collected statistics around empty shops in Newport as well as looking at UK vacancy trends and decided this was a key issue to tackle as part of the wider goal of Shaping Newport.

The council contacted a local agent that had shown interest in helping to support the scheme. The agent then contacted a number of landlords of empty shops to enquire as to their interest in short-term projects. The council had previously found that landlords are not usually interested in entering into short-term agreements, however the owner of the Laura Ashley, which had closed earlier in the year, were keen to support the scheme. The local agent managed the process of drawing up the terms of the agreement, and a contract and notice period were negotiated by the council for a number of shops owned by the same person. This contract included terms that should a potential tenant with long term interest come forward then the council would vacate the property. The council’s internal legal team were also required to put together a license to occupy for the traders who were part of the pop-up shop project, and the project team created risks assessments including one specifically for COVID-19.

The scheme was initiated in September 2020 and the council started to look for traders to occupy the pop-up shops. The council relied heavily on existing local relationships with traders built through previous events such as markets and were able to find traders for the pop-up shops through this channel. The council also relied heavily on existing partnerships for promotion, to ensure they got the required footfall to make the project a success. Partner organisations were able to promote the pop-up shops for no cost through their own social media channels with collateral provided by the council.

All traders had a successful experience and would participate in a similar scheme again. It is estimated that around £6,500 in sales was achieved for traders which far exceeded their expectations. There was positive PR locally about the use of the empty shops and the quality of products and marketing via social media, including trader profiles, with other partners worked well in attracting footfall which exceeded 1,300.

Without the link into the network of market traders, the Isle of Wight Council felt that the process would have been more complicated and time consuming. Existing relationships and partnerships were key for this scheme.

Social media was the prime source of promotion and the council felt the project would not have worked had it not been for the free publicity they gained through promotion through partner organisations social media channels.

The council found the location of the shop to be key. They operated from two locations, the second being a shop they used as the Shaping Newport base but this was in a less prominent high street location and didn’t have the same impact, so for meanwhile use and pop-up shops, consider a prominent location on a main thoroughfare if possible.