Death of Her Majesty Queen Elizabeth II: Briefing for councillors on the role of local government

All councils and councillors will wish to mark the passing of HM The Queen after more than 70 years as monarch. This brief guidance note summarises the steps that councils will be taking during the national period of mourning.

Following the death of Her Majesty Queen Elizabeth II on Thursday 8 September, councils have an important role in providing a focal point for local communities to come together to grieve, as well as to celebrate The Queen’s lifetime of devoted service to the nation.

Plans are in place to mark the passing of Her Majesty and during the period of national mourning, councils will be drawing on the following sources of guidance:

Due to the sensitivity of this issue, circulation of Government and other guidance has been restricted to senior council officers and civic leads, and many councillors may not be familiar with the role their council will play during the period of mourning in advance of the state funeral. This note therefore provides a brief overview of the role that councils will play in the sad days ahead, but is not intended as an alternative to the Government/NACO guidance. Councillors seeking information about local plans should use their usual communication channels with officers to clarify their local arrangements and raise any specific questions.

The exact steps that councils will take will vary from place to place; for example, depending on whether there is a royal palace within the locality, or whether there is the scope to host a large-scale event to mourn The Queen’s passing.  Again, councillors should seek an update from their own council on plans for their areas and how they can support these.

Following the announcement of The Queen’s death on 8 September councils will have taken immediate steps to:

Councils will also be taking decisions regarding whether to cancel any meetings, events and media activity planned for the period of national mourning until the date of the funeral.

Government guidance to councils does not specify whether councils should proceed with planned meetings and events, but follows the same approach set out in the public national mourning guidance, which states that:

"There is no obligation on organisations to suspend business during the National Mourning period. Depending on the nature and location of their business and the tone of planned events, some businesses may wish to consider closing or postponing events, especially on the day of the State Funeral, however this is at the discretion of individual businesses."

Individual councils will need to reach their own judgements about what can appropriately continue and what should be postponed. The LGA for instance has taken the decision that small-scale internal meetings which can be undertaken virtually, and do not take councillors away from their communities at this difficult time, will proceed. However larger, more public facing events such as our planned member briefing day and Executive Advisory Board have been postponed. In striking the delicate balance between respectfulness and serving our communities, some councils may take different approaches. What is most important is that where any meeting or event does take place, it is conducted within the spirit of the period of national mourning, with due acknowledgement of these unprecedented times (for example, remarks from the meeting chair, or a minute’s silence).

A number of councils have raised queries about council communications during the period of national mourning. The government guidance does not cover this issue beyond a statement that the public should remain able to access information; therefore as with meetings and events, individual councils will need to reach their own judgements about what can appropriately continue and what should be postponed.  One consideration is that during the period of national mourning, council communications will necessarily need to focus on amplifying messaging relevant to activities and events being held to commemorate the Queen: councils are encouraged to use ensure latest information about ceremonies and events is easily accessible on their websites.

The LGA’s own approach during the mourning period is to postpone all pro-active campaigning or promotion of LGA products and services (for example press releases, social media activity). However, we will continue to publish and appropriately communicate information of critical importance to our members, including in relation to arrangements for the national mourning period and state funeral; for example through bulletins and newsletters. All our corporate accounts will retain an amended, black logo until after the day of the funeral and we have removed campaign branded footers and information from emails sent externally.

A national mourning period will run until the date of the Queen’s state funeral.

Members of the public will be able to attend to pay their respects, however, the public should be advised that there are very long queues with people expected to stand for many hours, possibly overnight, with very little opportunity to sit down. The guidance also includes information about security protocols and what people should and should not bring to the into the Palace of Westminster.

On Sunday 18 September, a minute’s silence will take place at 8pm, providing an opportunity for a shared moment of national reflection, ahead of The Queen’s funeral at Westminster Abbey on Monday 19 September. The service will commence shortly before 11am, when The Queen’s coffin will be borne in procession from the Palace of Westminster to Westminster Abbey. Towards the end of the service, at approximately 11.55am, the last post will sound, followed by two minute’s silence to be observed in the Abbey and throughout the country. The national anthem will bring the service to a close at approximately 12 noon, following which the coffin will travel to Windsor for a committal service at 4pm and a private burial.

The national mourning period will end at 11.59pm on Monday 19 September, although the royal family’s period of mourning will continue for a further seven days following state funeral.

Councils are being encouraged to support, arrange and communicate opportunities for communities to come together at places of local significance to mourn and commemorate HM Queen Elizabeth II; in particular during the national minute’s silence on Sunday 18 September, but also throughout the national mourning period and on the day of the funeral itself. With very large numbers expected to travel to London, offering and promoting local opportunities for people to pay their respects – particularly for those who cannot or choose not to travel – will be important.

To enable people to come together to watch the funeral, the BBC is providing local communities a TV Licence dispensation available for the temporary screening of events of national importance. The dispensation will allow any communal setting where TV is not usually watched, such as community centres, town halls or libraries (if open), to screen the live broadcast without needing to purchase a licence. Usually, premises would need to be covered by a valid TV Licence in order to screen live television or from BBC iPlayer.

Councils are being asked to report to DLUHC what plans there are for commemorative events in their areas, as part of a reporting process taking place through local resilience forums during national mourning period. The Government is making details of local events available on its website.

DLUHC have produced additional guidance to support councils’ plans for the Bank Holiday that will coincide with the day of the state funeral. The guidance emphasises that essential public services should continue during the period of national mourning, particularly the provision of major life events such as weddings and funerals. Specific advice is provided on keeping register offices open to the public where possible, with Government advising that any decisions relating to the closure of register offices on the Bank Holiday should be considered carefully.

More widely, the guidance urges councils to strike a balance between maintaining services where appropriate and enabling staff to have time off, where possible, to join the nation in commemorating the Queen. Separately, the Department for Education has advised that schools will close for the day of the funeral. 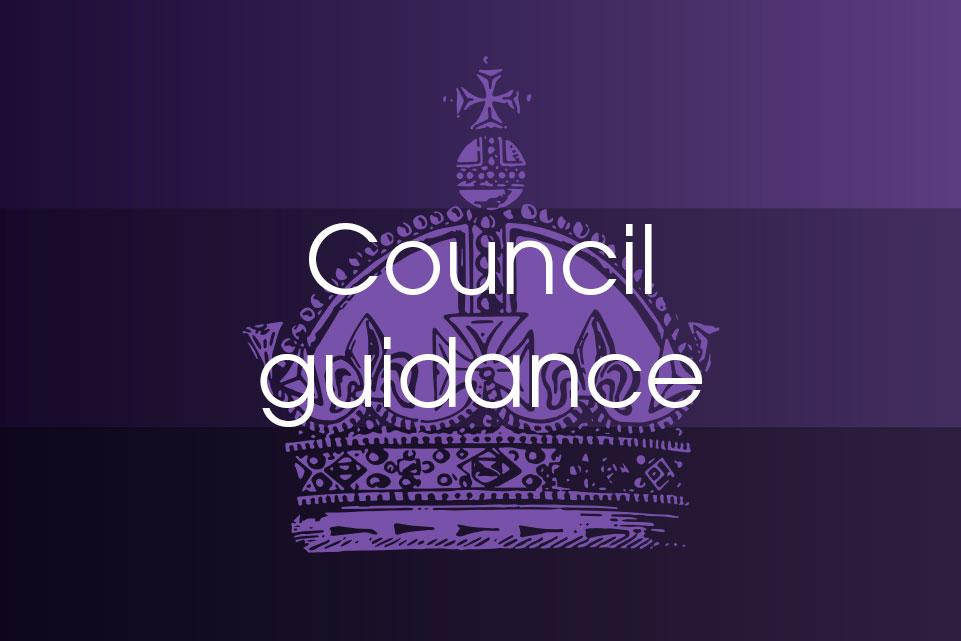 Letter to His Majesty The King